Costa Rica Sports News – Ever since the “snow game” where the USA defeated Costa Rica 1 to 0 in Denver, the Ticos have been waiting for this World Cup Qualifying rematch.  This is setting up to be a rivalry for a long time with animosity growing during each match. 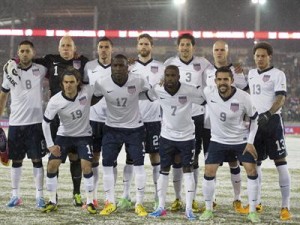 After another loss to the US National Team during the Gold Cup they want more.  Be careful what you wish for as the USA is carrying the longest winning streak in their history into the rematch.

The U.S. national team manager revealed his roster for the next two CONCACAF World Cup qualifiers, the September 6th game against Costa Rica and the one against Mexico on September 10th.

Heading Klinsmann’s 23-man roster are Landon Donovan and Clint Dempsey, favorite MLS stars who just signed long-term contracts. The duo haven’t been on the same roster since 2012! At that time they produced a 1-1 tie against Guatemala.
Graham Zusi, who had taken Donovan’s place when he was away from the team, will be joining Donovan in these games.

Nick Rimando and Kyle Beckerman from Real Salt Lake made the cut as well. John Anthony Brooks and Aron Johannsson are also included, after their success against Bosnia Herzegovina last month.

The U.S. roster is as follows.