World News – Well it seems like the inevitable strike on Syria is going to happen.  Hope everyone is ready for all hell to break loose from this idiotic decision.  House Speaker John Boehner, R-Ohio, on Tuesday endorsed President Barack Obama’s call for military action in Syria. At least we know now that Democrats and Republicans alike do not have functioning brains. 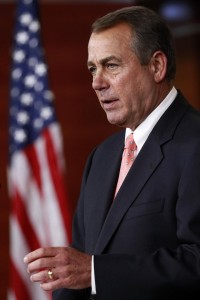 The top elected Republican in Washington, Boehner said following a meeting at the White House that he intended to support Obama’s plan for limited strikes against the regime of Bashar Assad in Syria.

As some Republicans signal their reluctance to approve Obama’s request for authority to intervene in Syria, Boehner’s endorsement could be influential. The GOP speaker is often hesitant to get out in front of his unruly Republican conference on major issues, giving Boehner’s pronouncement on Tuesday all the more weight.

Following the meeting, Boehner’s deputy, House Majority Leader Eric Cantor, R-Va., backed the use of force, as well.
“The use of these weapons has to be responded to,” Boehner said. “And only the United States has the capability and capacity to stop Assad and to warn others around the world that this type of behavior is not going to be tolerated.”

But, as if to drive home the point that Republicans aren’t onboard with Obama, Rep. Paul Ryan, R-Wis., Republicans’ 2012 vice presidential nominee who often sides with Boehner over conservative insurgents on many issues, voiced his skepticism.

“The President has some work to do to recover from his grave missteps in Syria. He needs to clearly demonstrate that the use of military force would strengthen America’s security,” Ryan said in a statement. “I want to hear his case to Congress and to the American people.”

House Minority Leader Nancy Pelosi, D-Calif., emerged following the meeting to express her own support for the strikes, on a humanitarian basis. But she said that Obama should lay out more of the evidence against Assad to help build his case for action.

“I believe the American people need to hear more about the intelligence that supports this action,” she said.

If Boehner and Cantor can deliver a large number of Republican votes, they could combine with Democrats in the House to help advance the resolution supporting the use of force in Syria through the politically-tricky House of Representatives. But Boehner’s office also made clear that the Obama administration would need to spearhead any effort to win the necessary votes in the House.

“Everyone understands that it is an uphill battle to pass a resolution, and the speaker expects the White House to provide answers to members’ questions and take the lead on any whipping effort,” said Michael Steel, a spokesman for the speaker.

CR ESL Teaching; Fake It ‘Till You Make It