Costa Rica News – If only U2 was doing a concert here, I can dream can’t I?  This is my favorite band of all time and if you have ever seen them in concert and listened to Joshua Tree, you would probably agree. 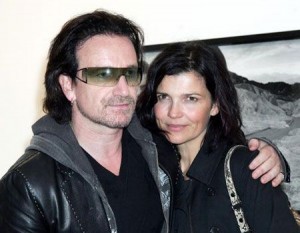 Irish singer Bono and his wife Alison Hewson, have been vacationing in Costa Rica since February 11th, confirmed the Directorate General of Immigration.

That day there was the entry the Irish couple Alison and Paul David Hewson (real name of the singer) through Juan Santamaría airport.

The migration records show the arrival of the tourists between 9:33 pm and 9:36 pm on that Monday. After that, there have been no reports of their movements in the country.

According to the press department of Immigration, up until noon yesterday their had been no reports that either of them had left the country.

This was their first visit to Costa Rica. Bono has been the leader of the band  U2 since 1976.

His wife, however, and was in Costa Rica on the 14th February last year, and remained in the country for nine days.

During the last two days, rumors circulated that Bono’s wife has had an accident while riding a quad on one of the country’s beaches.

Due to injuries sustained in this accident, Alison was taken by helicopter to CIMA Hospital in  San José.

Maricela Retana, public relations officer of the medical center said they were not authorized to give information on patient admission.

Bono, 53, and Alison, 52, were married in 1982 and are the parents of four children. They live most of the year in South Dublin, Ireland.