Costa Rica Travel – One of the biggest attractions for people travelling to Costa Rica are the sleeping giants, the volcanoes.  Costa Rica may be best known for it’s volcanoes-travelers from around the globe have come here in recent years to glance at Arenal, the most well-known of them all. It has entered a resting phase in 2010 but there are many others to enjoy. 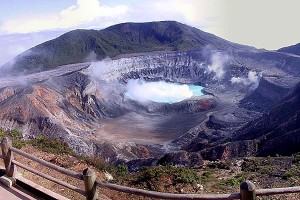 Poas Volcano is found in the Central Highlands and is one of the largest and most active volcanoes in Costa Rica. The crater collects rain and the sulfuric pool causes smoke to arise. Geysers of up to 820 ft high have been observed. It’s an easy day trip from San Jose.

Rincon de la Vieja is the closest to the Pacific Coast and the airport in Liberia. The cinder cone consists of nine craters. You may choose to attempt a 6 mile hike to the top of the Santa Maria Crater. It’s a tough hike but the view makes it all worth it!

Irazu is another one close to the capital of Costa Rica. The mineral richness in the crater causes a transformation of color, sometimes emerald and other times crimson red! On a clear day you can see both oceans from Irazu Volcano.

Turrialba Volcano gives you an experience of more than just hiking and seeing smoke, from here you get a view of the Atlantic coast and 3 other volcanoes!

Although there is much more to know and learn about these volcanoes, take a trip down to Costa Rica to experience them in person as pictures do not tell the entire story.