Weather News – For those in the Philippines it is not a pretty picture for the weekend as Typhoon Hagupit heads their way.  For most this means power outages, mudslides and flooding.

The military was on high alert and thousands of families were evacuated Friday morning as Super Typhoon Hagupit and its 180-mph winds remained on course for landfall in areas of the Philippines devastated by Super Typhoon Haiyan last year.

At noon local time (5 p.m. Thursday ET), Hagupit was about 670 miles east-southeast of Manila, moving west-northwest at 11½ mph pushing maximum waves of 45 feet. The U.N. Global Disaster Alert System said almost 32 million people — a third of the country’s population — were likely to be affected in some way by cyclone-force winds when the storm arrives in central parts of the island nation Saturday afternoon or evening.

Hagupit, known locally as Ruby, was expected to weaken slightly but to remain a top-level Category 5 storm with life-threatening winds, storm surges and flash floods.

“This storm is not going to be quite as strong as Haiyan, but the probability is it has the potential to impact some of the same areas that were impacted last year,” when last year’s strongest storm killed more than 7,000 people in the Philippines in November 2013, said Ari Sarsalari, a meteorologist for The Weather Channel.

“By this weekend, you guys be aware, because this is definitely the type of situation that can get very ugly,” Sarsalari said.

Some weather agencies had suggested earlier that Hagupit could take a northerly route skirting the country. But by 5 a.m. Friday (10 a.m. Thursday ET), the Philippine and Japanese national weather bureaus and the U.S. Navy’s Joint Typhoon Warning Center all said its course had clarified and agreed that it was most likely to remain on course for the Philippines. 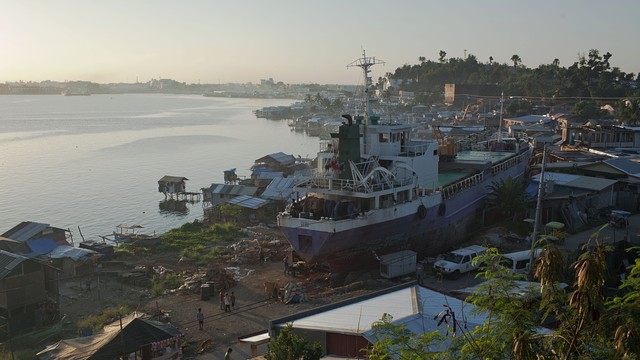 Hagupit’s movement is expected to slow significantly as it reaches land, and forecasters said it could take as long as three days just to clear Manila. Sarsalari said rainfall totals could be “extraordinarily high,” leading to landslides, debris flows and life-threatening flash floods.

At least 15,761 families in Tacloban City in Leyte province — where 3,000 people were killed by Haiyan last year — were being evacuated on Thursday, local officials told the Philippine Daily Inquirer, the country’s largest newspaper. Demand for refuge is so high that some families were being moved 10 miles inland, the U.N. Office of Disaster Risk Reduction said.

Col. Restituto Padilla, a spokesman for the Philippine military, said at a briefing that the armed forces were on “red alert” and were rushing troops and equipment into position. He said the military was intent on making sure that “the disaster-prone areas are safe.”