Costa Rica may be an under-developed country, however, their bus system is fairly well thought out. It’s convenient and inexpensive! Buses in and around San Jose and the nearby cities are normally 50 cents to $2. There are terminals in downtown San Jose and stops along all major roads in both directions. 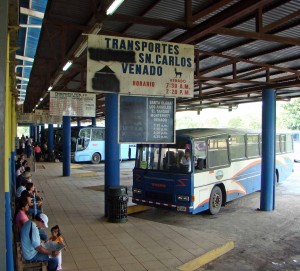 Most Ticos use buses because they don’t own a car. Others use it because the price of gasoline is such that they only use their car when absolutely necessary. Buses can get them almost anywhere just as quickly as in a car (because of being stuck in the same traffic!)

Buses are in good condition on average and a great deal for the price. A few are old converted school buses now used for the public. Keep in mind that the seats in most buses are small. Many times skinny people don’t even fit totally on their seat! Prepare to be cramped next to the person on either side of you. Another strange part of riding the buses in Costa Rica is that the windows will be closed at the first sight of rain, leaving you in a humid cramped space.

If you are going all the way to the coast you may want to use a private bus like Grayline or EasyRide. The seats are padded and the air conditioning usually works. Some may even have bathrooms. The cost is around $30 (discounts for kids and seniors).

At the bus terminals you will see people sitting on their luggage and I suggest that you copy them! These are the most dangerous places of Costa Rica because of the eassy opportunities to rob people.

If you have 5-6 people in your group you will find it cheaper, safer, and more comfortable to rent a private van and driver for about $140 from San Jose to the Guanacaste beaches.