A cruise line says it is making the passengers stranded aboard a disabled ship in the Gulf of Mexico as comfortable as possible with running water and some working bathrooms, contradicting the accounts of some passengers who told relatives of filthy, hot conditions and limited access to food. 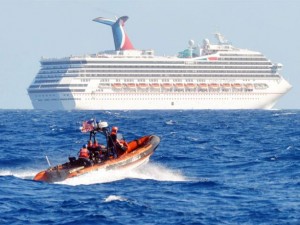 The ship, the Carnival Triumph, is still at least a day from being guided to a port in Mobile, Ala.

Carnival President Gerry Cahill said Tuesday the ship has running water and most of its 23 public restrooms and some of the guest cabin bathrooms were working. He downplayed the possibility of an outbreak of disease from unsanitary conditions, saying the ship had not seen an abnormal number of people reporting to the infirmary as being ill.

“No one here from Carnival is happy about the conditions onboard the ship,” Cahill said at a news conference in Miami. “We obviously are very, very sorry about what is taking place.”

Jimmy Mowlam, 63, whose 37-year-old son, Rob Mowlam, got married Saturday onboard the ship, said his son told him by phone Monday night that there is no running water and few working toilets. He said passengers were given plastic bags to “use for their business.”

Despite a forecast of brisker winds and slightly higher seas, the Coast Guard and Carnival said they did not expect conditions to deteriorate aboard ship.

A cold front was expected to cross the central Gulf where the vessel is under tow, bringing north and northwesterly winds of 15 to 25 mph and seas of 4 to 6 feet, said Dennis Feltgen, spokesman for the National Hurricane Center.

The ship was about 200 miles south of Mobile, Ala., as Tuesday faded into Wednesday, the Coast Guard said. Carnival says the ship is expected to arrive in Mobile on Thursday.

The ship left Galveston, Texas, for a four-day cruise last Thursday with 3,143 passengers and 1,086 crew members. The 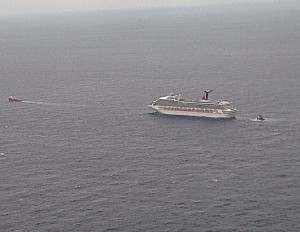 ship was about 150 miles off Mexico’s Yucatan Peninsula on Sunday when an engine room fire knocked out its primary power source, crippling its water and plumbing systems and leaving it adrift on only a backup power.

No one was injured in the fire, but Carnival spokeswoman Joyce Oliva said Tuesday that a passenger with a pre-existing medical condition was taken off the ship as a precaution.

Everyone else likely will have to remain onboard until the ship reaches Mobile, Ala., which is expected to happen Thursday, weather permitting.

Besides two tugs, at least two other Carnival cruise ships have been diverted to the Triumph to leave supplies and a 210-foot Coast Guard cutter was at the scene, Coast Guard Petty Officer Richard Brahm said Tuesday.

Mowlam said his son told him the lack of ventilation on the Triumph had made it too hot to sleep inside and that many passengers had set up camp on the ocean liner’s decks and in its common areas. Mowlam said he wasn’t sure where his son was sleeping.

“He said up on deck it looks like a shanty town, with sheets, almost like tents, mattresses, anything else they can pull to sleep on,” said Mowlam, of the southeast Texas town of Warren. His son is from nearby Nederland.

Mowlam said his son indicated that passengers are trying to make the best of a bad situation.

“So far people have been pretty much taking it in stride,” Mowlam said his son told him.

“He was concerned about what that was going to lead to when people start drinking too much,” Mowlam said.

Other passengers have described more dire conditions, including overflowing toilets and limited access to food.

Jay Herring, a former senior officer for Carnival Cruise Lines, said one of the biggest concerns crew members will have until the ship docks is the potential for disease outbreak, particularly norovirus, which causes vomiting and diarrhea.

“Housekeeping, others are probably working double shifts to keep the mess clean and wipe down and sanitize all the common areas,” said Herring, who worked for Carnival from 2002 to 2004 and spent four months on the Triumph.

The National Transportation Safety Board announced Tuesday it has opened an investigation into the cause of the fire. The NTSB said the Bahamas Maritime Agency will lead the investigation because the ship carries a Bahamian flag.

The ship was originally going to be towed to a port in Progreso, Mexico, but after currents pushed it northward, the company decided to take it to Alabama, saying it would make it easier for passengers without passports to get home.

Cahill said Carnival has reserved more than 1,500 hotel rooms in Mobile and New Orleans for Thursday. The company plans to return passengers back to Houston on Friday using charter flights.

A similar situation occurred on a Carnival cruise ship in November 2010. That vessel, named Splendor, was stranded with 4,500 people aboard after a fire in the engine room. When the passengers disembarked in San Diego, they described a nightmarish three days in the Pacific with limited food, power and bathroom access.

Cahill said the Spendor’s fire was different because it involved a “catastrophic explosion” in a diesel generator, and the Triumph’s fire had “some other cause.” He could not say what the economic impact will be due to the fire aboard the Triumph. The impact from the Splendor was $40 million, he said.

Carnival canceled the Triumph’s next two voyages, scheduled to depart Monday and Saturday. Passengers aboard the stranded ship will also receive a full refund.

Getting Your Residency in Costa Rica