Costa Rica News – Since the Costa Rican government does not seem to want to step up to take care of this problem it is up to us on the private level to start doing something.  These programs make me smile. 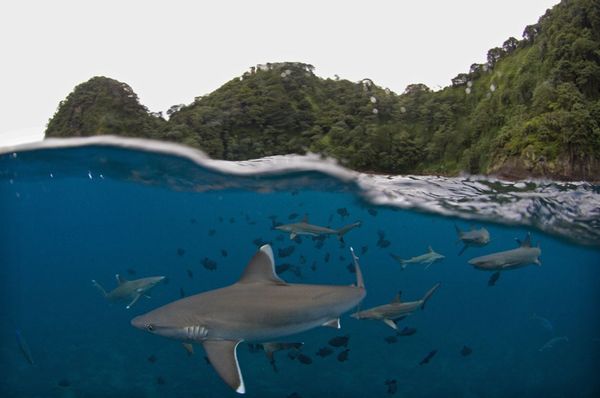 Cocos Island is an important stop over for large marine wildlife like hammerhead sharks, Galapagos sharks, tiger sharks, blue sharks, whale sharks, dolphins on their oceanic migrations. The Island is also a home to green and hawksbill sea turtles, who find refuge in the coral reef.Underwater explorer Jacques-Yves Cousteau dived at the Island and called it “the most beautiful island in the world.”

Yet, sadly this blue gem is under attack by illegal longline fishing vessels that enter into the marine protected zone that extends around the Island in search of tuna, sharks and Mahi mahi.

Longline fishing is a deadly type of fishing that consists of setting a main line with hundreds or thousands of baited hooks and then indiscriminately catching, harming or killing whatever swims into the line.

This practice is draining the seas of endangered marine wildlife. Air breathing endangered sea turtles that swim into the lines will often drown as they are unable to come up for air, while sharks that must swim to force water to the gills are also unable to stay alive when caught.

Furthermore longlining inside the protected marine reserve, national park and UNESCO World Heritage site around the Island is especial egregious as it puts vulnerable and endangered marine wildlife populations in extreme danger, and leaves the zone littered with fishing gear.

The innovative partnership between Tomnod and Turtle Island Restoration Network aims to protect the Island’s marine biodiversity by using crowd sourcing to catch vessels fishing within the preserve illegally.

That’s where you come in!

No matter where you live, you can help us look for illegal fishing boats by visiting http://www3.tomnod.com/ and searching for boats in the ocean.

Join us in our efforts to end illegal fishing, protect endangered sharks and sea turtles, and pioneer a new way to protect our seas by visiting http://www3.tomnod.com/