Ghosts & the Supernatural – Mark Twain frequented St. Charles Place. James Beckworth – Trapper who was known to have freed slaves via the Underground Railroad and was known to have several Indian wives, visited Downieville many times. Joseph Zumwalt arrived in Downieville in 1850 and brought with him The Secrets of the Ancient and Honorable Order of E. Clampus Vitus. He would have secret meetings with his new selected Downville order. There has been several fires in Downieville. 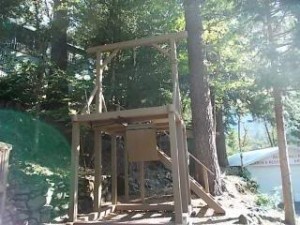 The Ghost of James O’Neill

‘Sierra County Sheriff’s Gallows November 27, 1885. 20 Year Old James O’Neill killed a man on August 7, 1884. He murdered Webber Lake Dairyman John Woodward. Executed by Sheriff Samuel C. Stewart. Facebook friend says that he talked to a few people in Downieville and some claim that they have seen the ghost of James O’Neill. The ghost is seen with horrific rope burns on his neck.

Pretty much the whole town is haunted, the two biggest spots are Downieville River Inn. This is a certified haunted inn, it’s in the book “Haunted California.” Room #1 is supposedly haunted by one of the boarders from when the inn was a boarding house. Reports of water turning on and off by itself. Reports of someone getting into bed with them, or laying on top of them. Also their is paranormal activity in the basement laundry. The ghost is a woman ghost and one of the stories is she was the wife of the owner who either fell or was pushed down a mine shaft.

One particularly infamous crime was when a Mexican woman named Josefa Segovia was lynched by a mob in Downieville. She was accused of killing a white man who had attempted to assault her after breaking into her home. It remains the only lynching of a pregnant female in California history. It is said, that Josefa’s ghost haunts the town. The lynching consisted of a severe beating by several men and then she was hung.

The other location is the Jersey Bridge. 24 yr. old Juanita was executed by a lynch mob July 5th 1851. Juanita was hanged from the bridge for murdering a popular local man, whose amorous advances she had resisted. Later her skull was stolen from her grave and used as an initiation at a men’s club in Sierra City. Today Juanita’s ghost appears out of a fog in the southeast corner of structure and walks towards bystanders as if trying to tell them 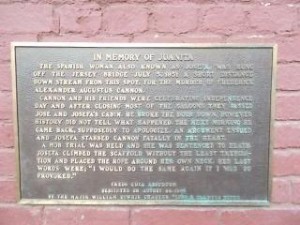 something. The location of her grave is unknown due to the cemetery being moved several times by miners digging for gold. (A steel bridge has replaced the original wood bridge. On a small building at the end of the bridge is a plaque dedicated to her memory.) This is just one of several stories. Sacramento Haunts actually does a ghost tour there. There is also nearby the town of Sierra City. The Sierra City hotel is said to be haunted. An apparition appears in the second story window.

Juanita before she died says: “I would do the same again if I was so provoked.”

Rebecca B – Employee of Downieville River Inn. “I felt someone sitting on the bed, sometimes it feels like a ghost cat jumped on the bed. GHOST IDENTIFIED: DOWNIEVILLE RIVER INN PHANTOM CAT.

I once felt a hand rub my arm. I have taken many orb photos throughout the Inn. Once there was a man that saw a woman apparition in the mirror and the woman ghost says to him: “My dress is worth $100.00!” Then she vanished. GHOST IDENTIFIED: THE PRICE TAG GHOST.

Another time a man claimed he saw two ghostly mean looking cowboys that stared him down and then vanished. GHOSTS IDENTIFIED: THE TWO MEAN COWBOYS.

Another story about Juanita is that there was a group of hombres that were drinking, they were looking for more alcohol and decided to break down Juanita’s door. They looked for some of the alcohol and tried to gang rape Juanita. Juanita fought back their advances. The next morning the leader of this gang went back to Juanita’s home to apologize. Juanita stabs him and kills him. The man she stabbed was a very large man, so they dug a big hole for him and when they buried him, they threw in Juanita’s corpse over his dead body and buried them both together.”

Terra Mihelic Interview: “I like to beat box with my mouth. (Terra demonstrates and does a great job of it!) One day I was beat boxing in Room 3 and some unknown thing beat box right back at me, in my face, I felt the ‘pah pah, pah’ in my face! Some people see a young girl apparition and they believe it was a young girl that was rough housing with her cousin by the river and drowned. GHOST IDENTIFIED: THE DROWNED GIRL.

The Death Throes of Consumerism?