The Death Throes of Consumerism?

This time of year, from Thanksgiving to Christmas, is the most on-display, consumeristic, and spiritually and emotionally empty time of year in America.More American homes this year already had Christmas lights up even before the national holiday of Thanksgiving at the end of November. That makes a mockery of Thanksgiving. The white or colored lights are meant to confer cheer on cheerless residents, but have just the opposite effect on citizens who don’t confuse feeling with sentimentality. 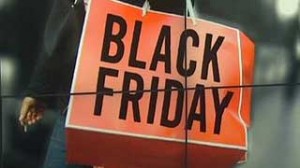 This has to be the most difficult country on earth to be a philosopher. Oh, you can write and speak without being thrown in jail. And you can get by materially even if you think critically, are self-aware and speak the truth. But only the strongest survive inwardly. We’ve become a country that glorifies mercenary soldiers (‘heroes’) of endless wars that aren’t actually wars, and celebrates the vast numbers walking dead (‘zombies’).

The day after the national day of thanks, which traces its roots all the way back to the Pilgrims and the Native Americans who helped them make it through a winter that sent the first European immigrants into a death spiral, is called ‘Black Friday.’

It’s aptly named. It is the true national holiday, celebrating hordes of people who drop before they shop, standing and sleeping in lines all over the country for 18, 24, or more hours to get their grasping hands on a cheap flat-screen TV or I-pad.

There were many incidents of pushing and shoving over merchandize in every state, but in some, such as California, Virginia and Nevada, things got really ugly. A few people were shot and stabbed in frenzies not over food, but over a limited number of high-end items marked way down by retailers to appeal to the lowest common denominator, and spur Christmas sales. Consumerism is a drug that wears off quickly after repeated use.

It may be hard for people in countries where many folks are barely able to feed themselves to comprehend this reality. There is poverty in America, to be sure, but this consumeristic mayhem has nothing to do with scarcity, and everything to poverty of the mind, heart and spirit. Does the so-called developing world have to develop like the so-called developed world?

Consumerism also has become linked with patriotism in America. People recall, shortly after the attacks of 9.11, George Bush saying, “We cannot let the terrorists achieve the objective of frightening our nation to the point where we don’t conduct business, where people don’t shop. That’s their intention.”

That’s been widely and correctly interpreted (especially since many Bush Administration officials and other politicians echoed the same sentiment at the time) as ‘go shopping’ as a response to terrorism. Some politicians even

pronounced, “It has never been more patriotic to go shopping.”

Business and political ‘leaders’ were afraid that the terrorist attacks would deleteriously affect consumerism, which is nearly three-fourths of the American economy. So they conflated consumerism and patriotism.

Over a decade and a financial collapse later, it seems they didn’t have to worry. Or do they? For all the hoopla, spending is actually down 4%.

It’s hard to feel sanguine about the human prospect living in such a land, but I’ve come to feel that I’m here for a reason. Not just to tell the truth to people in other lands, and to those in my ‘homeland’ that will listen. Despite or because of the deadness wrought by consumerism, there may still be a potential for radical change here like no other nation on earth.

People who question and think together can uncover and discover the truth, which is never fixed and has nothing to do with opinions, beliefs and ideas. It’s the job of philosophers to spur enquiry as an essential element of life.

It isn’t that philosophers are so complicated, but that the human mind is. And when philosophers put the intellect above insight, which is always of the moment, they make things even more complicated with their systems of philosophy. The aim of philosophy is to simplify without being simplistic.