Entertainment News – With six Academy Award nominations, “American Sniper” is earning praise for its realistic portrayal of the Iraq War’s urban battles, and the conversations that military families have at home. 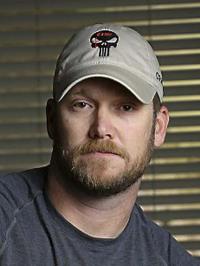 The film’s subject, Chris Kyle, was the most lethal sniper in U.S. military history, with 160 kills, and he retired from the military in 2009, finding ways to help veterans back home with his family in Texas. However, the former Navy SEAL was killed in 2013, allegedly by a mentally disturbed veteran he was trying to help.

During Kyle’s funeral, his wife, Taya, delivered a eulogy describing the complicated, meaningful life that her husband lived, saying: “All of it, the messy, painful, constantly changing, crazy ride was rolled up into the deepest, most soul-changing experience that only man Chris Kyle could bring.”

Taya told TODAY how balancing Chris’ commitment to his country and his family, made her sometimes wonder if someone else could do Chris’ job. But, she said, the honest depiction of their life is one of the reasons she’s so happy with the movie.

TODAY’s Lester Holt interviewed the film’s subject, Chris Kyle, in 2012, during which time the former Navy SEAL openly discussed the role his commitment to the military played on his family.

“We struggled to keep our marriage together,” he said.

And the film’s stars, Bradley Cooper and Sienna Miller, said that portraying the Kyles’ relationship honestly, and how Chris was torn between his duty to his family and his country, was an important part of the film-making process.

“I think that it’s an essential part of Chris’s story,” Miller said. “Because the dilemma that he’s in — trying to juggle a home life with a wife and two children, but feeling like when he’s at home, there are people dying — that probably wouldn’t if he was there.”

The narrative of the film, Cooper said, “is this constant, almost schizophrenic nature of having to go home and then back on the tour.”

Ultimately, Kyle’s need to protect those in danger led him to four deployments in Iraq. The veteran, in 2012, told Holt that his goal after retiring form the military was to raise awareness for the troops, and encourage “random acts of kindness to show your thanks.” He said that he wanted fellow veterans to “know that they’re wanted and loved.”

“He had such a humility and such a heart of service that was in this package that was fun-loving and protective, and had all these nuances that made it always interesting,” Taya said. “But he chose war because he knew that was protecting people.”

Visit NBCNews.com for breaking news, world news, and news about the economy