The depraved and cowardly terrorist attack at the Boston Marathon comes as no surprise and causes little shock. Though it looks like an act of domestic rather than Islamic terrorism, it’s already being used as filthy fodder for the pall of patriotism in America. 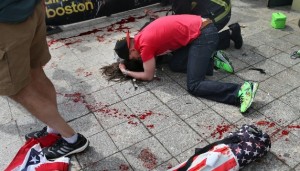 The bomb killed an 8-year-old boy who had just congratulated his father on his race, and blew the leg off his sister and badly wounded his mother.

Given that likelihood, Obama’s calculus does not obtain: “If you want to know who we are, what America is, how we respond to evil, that’s it: selflessly, compassionately, unafraid.”

Already the vast machinery of the Homeland Security complex, which has corrupted both Democrats and Republicans alike, is ginning up for this Boston massacre being international (code for Islamic) terrorism.

After all, what good is a trillion dollar Homeland Security budget if the evil erupted from the homeland?

“I have done post-attack analyses on attacks around the world, trying to learn lessons…the timing here, the devices themselves, the ball bearings used—you know, that’s not some kid in his garage putting something together,” said Rep. Stephen Lynch, a Massachusetts Democrat who sits on a national security subcommittee in the House of 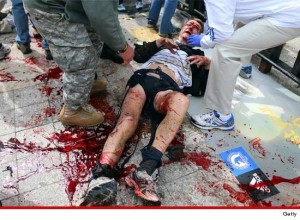 Even so, the authorities are being careful to give passing mention the Oklahoma City bombing, which was committed by an extremist militia out of Michigan. But the focus, from the president on down, is clearly on ‘international terrorism’ as the likely source of the maleficence.

As the Soviet Union was collapsing, a close advisor to Mikhail Gorbachev said, “We are going to do the worst thing to you; we are going to deprive you of an enemy.”

Americans, more than most people, have needed enemies. Clinton fellatioed while Rome burned, and Islamic extremists stepped in just in time early in the Bush-Cheney Administration.

But the terrorist network sheltered by the Taliban in Afghanistan weren’t enough of an enemy, so America went to war against Iraq. That unleashed a tsunami of suicide bombings in that country and around the world like the world has never seen.

We’re in the death throes of nationalism. There’s a reason for the saying, “patriotism is the last refuge of scoundrels.”

The division between domestic and international (Islamic) is not only false; it feeds terrorism, at home and abroad. It is based on the need for an enemy, and adds to the ‘us vs. them’ mentality at every level. It demands a nation of patriotic scoundrels, deeming anyone who dares question the paradigm an enemy of the state, a traitor. 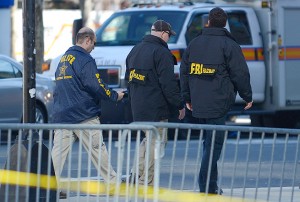 A smarmy international terrorism expert repeatedly invoked 9.11 today even as he was saying how proud he was of people “showing restraint and prudence” with regard to assigning blame. Speaking of out both sides of his mouth and repeating the core lie, he intoned, “We have learned, we have learned, we are better than we were at 9.11 because we invested all that money and trained in responding to terrorist attacks such as this.”

People who were there were more truthful. “I knew immediately what it was,” said one man. “This is like a bombing you read about in Baghdad,” said another.

So it wasn’t just the first responders, who had rehearsed for it, that reacted with practiced calm. It was the people who were victims of the bombing as well.

But rather than tell the American people the truth—that the government doesn’t know who did this, doesn’t know whether this evil spewed from within or beyond our shores—President Obama used the horror to indulge in more denial, whitewashing the truth with the lie that “the American people refuse to be terrorized. Because what the world saw yesterday in the aftermath of the explosions were stories of heroism and kindness and generosity and love.”

Numbness and the expectancy of evil are the ultimate triumph of evil. Evil is evil, through whomever it flows. Seeing the world in terms of enemies only feeds the darkness that’s the foul, fetid ground of such attacks. Evil originates from a single, stinking reservoir of division, darkness and denial that have come to define human consciousness.

There is a truth embedded in Obama’s lie however. The American people do respond with courage and kindness during a crisis. It brings forth the best in us–for a little while.

Some Americans have already gone beyond the divisive and dualistic category of ‘domestic or international’ (Islamic), and between the ‘us vs. them’ mentality in general. They see themselves as citizens of the world, which everyone in fact is in the de facto global society.

The Boston bombing was intended to produce the opposite effect, and the politicians, including and especially the president with his patriotic claptrap, are playing into the hands of evil.

Can the bombing at birthplace of the American Revolution induce many more Americans, and people of goodwill all over this dark world, to look within? That’s how we can to turn darkness to light.