Costa Rica News – Although we all know that there is shark finning going on in the waters of Costa Rica, let’s look at sharks in a different light for at least today.  The media has certainly made us fear sharks. Maybe this fear has separated us from an opportunity to witness them and learn about these captivating creatures up close. 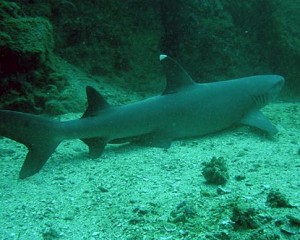 It is possible to include a swim with the sharks to your tour of Costa Rica without the danger. You can even add to the conservation efforts which are already in place.

A conservation group, Oceana, reports that only 4 people per year are killed by sharks. There are much greater risks in the ocean such as rip tides. Here’s a fascinating fact: 25 million sharks are killed by humans per year- sounds backwards, right? Sharks are important to maintaining the health of the ocean as the top predators in the food chain. As they reproduce slowly and give birth in small numbers they are highly susceptible to the threat we pose to them, hunting them for their fins.

Ecotourism is on the rise with everyday people wanting to make a difference. Many tour companies take advantage of shark tourism to benefit conservation. The Sea Turtle Restoration Project has begun offering a trip for divers to help tag hammerhead sharks for a research program. If you have ever taken pictures of a whale shark with an underwater camera you can upload them to the Whale Shark Photo ID Library as part of an important identification resource.

If you like the idea of seeing sharks but you are very nervous, try swimming with the least threatening ones, the whale shark. They have no teeth and are not aggressive to humans. Also remember to keep some distance and remain calm at all times.