Costa Rica News – Although there are always the traditional means of transportation to get around Costa Rica like rental cars, busses, and private vans, some  of your thrill seekers may want use alternative transportation to broaden your horizons and add to your adventure. 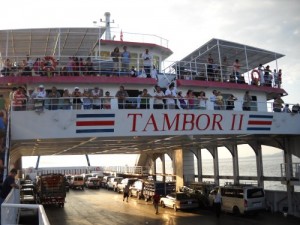 Puntarenas to Paquera by Ferry

The Tambor III shuttles travelers across the Gulf of Nicoya.

Upon arrival in Costa Rica, my objective was simple: Get from San Jose to Montezuma in time for dinner. Since Montezuma is located on the Nicoya Peninsula, flying to nearby Liberia would’ve been the easiest way to get there, but unfortunately, all of the flights were sold out.

Instead, I took the long way. It started with a van ride to Puntarenas, where I caught the Tambor III, a large ferry that shuttles passengers and cars across the Gulf of Nicoya, cutting what would be an three-hour car ride down to a 65-minute boat ride. The ferry arrived in Paquera at sundown and we were greeted by another van that would take us to Montezuma via a winding, unpaved road through the mountains.

As we pulled out of the parking lot, the van passed what looked like a group of female prostitutes propositioning departing passengers for rides. The driver leaned over and smiling said, “Gays.”

So began the most terrifying car ride of my life. The driver floored it, speeding up and down the hilly road through the dark, swerving to avoid huge potholes, passing slower drivers and almost running off the road innumerable times. And then the unthinkable happened: We ran over a cat. While passing yet another car, there it was—frozen in the middle of the road, staring right at us. Knowing there was no way to avoid it without running off the road, our driver plowed straight ahead. I heard the bumper clip the animal as we passed over and involuntarily let out a little gasp.

After a few seconds of silence, the driver looked at me and said, meekly, “Sorry.” We continued to Montezuma, avoiding cows, potholes and motorbikes on the way. Upon arrival, I requested a large cocktail to calm my nerves and numb my mind from the horrors of the Cat Murder Express.

While in Montezuma, my primary method of transportation was the back of my friend’s motorcycle. The above video, shot using a GoPro HERO3: Black and a chest-mount camera harness, starts on the driveway (read: treacherous dirt path) from his house to the road and depicts the downhill ride to Montezuma’s tiny town center. Never having ridden a motorcycle before, I found myself tensing up while riding (in the video you can hear my friend complain that I’m squeezing him too tight). On a related note, another friend rented a scooter from one of the shops in town and crashed it into a parked car during our. Thankfully he was not hurt, but the accident ended up costing over $1,000 in damages. The obvious lesson learned: don’t rent uninsured vehicles in foreign countries!

Hoping to cut down on travel time to Manuel Antonio National Park, we booked a speedboat to take us from Montezuma 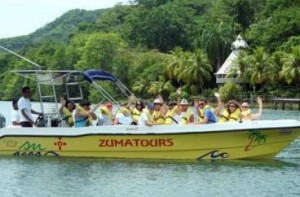 to Jaco. This proved to be a great way to travel—much faster (and less crowded) than the ferry. Plus, we stopped during the ride for a bit of dolphin spotting. I wouldn’t recommend the speedboat if you have back problems, as the ride can get very bumpy. The two taxi boat operators in Montezuma are Zuma Tours and Cocozuma—book directly with them to avoid confusion; we booked via a third-party site and it was not clear that the boat only went to Jaco—not directly to Manuel Antonio.

The highlight of the ride from Jaco to Manuel Antonio is passing the palm oil plantations along the way. At certain points, the neatly organized rows of palm trees spread out as far as you can see on both sides of the road.

Two airlines operate within Costa Rica—Sansa and Nature Air. On the highly subjective advice of my friend (“locals fly Sansa”), I booked a ticket. My first time in a small, single-engine jet was, thankfully, uneventful. The wind is definitely more noticeable in a small plane, as you get blown around quite a bit, but flying low to the ground gave us a gorgeous view of the mountainous terrain below. By RICKY MARSON

An Archaeological History of Costa Rica