Costa Rica News – It seems ICE is taking lessons pretty well from the administration of Laura Chinchilla and the most of the government of Costa Rica. Since it is a government run entity we should not be surprised by this I guess. 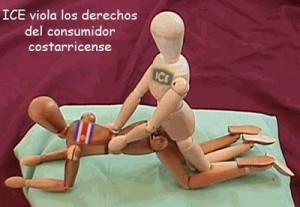 Instead of changing their terrible customer service and service in general ICE is complaining about the fact that they now have to deal with competition and it is killing their profit margin. May people are switching to Movistar and Claro because of better service and ICE is refusing to change their ways.

Over the last year there was a decrease of 2.7%.

Currently, ICE has 84% ​​of the mobile market, Claro and Movistar have 9% and 7%, respectively.

The response of the institution to losing market share was to raise investment in advertising and marketing to retain customers. This item increased by 16% in 2012.

Let’s now throw in the fact that like the Chinchilla administration money is being spent on marketing to try to provide a good image instead of actually trying to show with actions that their service has been made more customer friendly.

However, the locals in Costa Rica have been dealing with terrible service provided by ICE for years and they know that nothing has changed to make their experience with what used to be a Costa Rican monopoly, ICE. It is easier for Chinchilla to fool people abroad with a smoke a mirrors marketing campaign how “green” and “environmentally friendly” the country of Costa Rica is than it is for the local phone company to pull the wool over the Costa Rica residents’ eyes.

Although ICE maintains a strangle hold on the market with a huge market share, it seems to be slowly loosening. The only way they will retain their decreasing amount of customers is to change the essence of the company from a government owned and operated monopoly to a company needing to cater the the clients.

If they are unable to adapt they will lowly be knocked out of the marketplace……this seems the most likely result of this capitalistic sector of the Costa Rican economy.