NFL Gambling Picks – The wheels have completely come off for the New York Giants, who are off to a disastrous start and face a short turnaround when they visit the Chicago Bears on Thursday night. 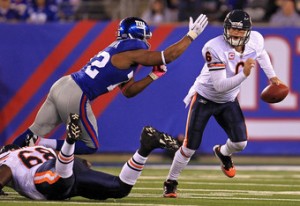 The Giants have dropped their first five games, the franchise’s worst start in a non-strike season since 1979, and have shown little resistance while surrendering a league-worst 36.4 points per game. As bad as the Giants have been, they are only two games out of first place in the NFC East.

There is also plenty of concern in Chicago, which is coming off back-to-back losses following a 3-0 start to the season. A stout defense is normally a staple of the Bears, but they have been burned for an average of 28 points per game and have yet to hold an opponent under 21.

Quarterback Jay Cutler threw for 358 yards in Sunday’s 26-18 home loss to New Orleans, but Chicago’s defense allowed Drew Brees and the Saints to control the ball for 36 minutes.

Line has dropped to 7.5 so I would take the Bears for me they should be 11pt favorite..
* New York has allowed at least 31 points in the first five games, matching a league record set by the Chicago Cardinals in 1954.* Bears RB Matt Forte has rushed for 375 yards and also had 27 receptions for 200 more.* The teams have not met since October 2010, when the Giants posted a 17-3 home win.
Toby pick =  Chicago Bears -7.5
Get 10% back on all weekly losses through the links below.
www.tobybets.com
www.theperhead.com
bears minus the pointsbest sports gambling siteschicago bears footballfootball picksfree football picksgambling bonusgiants at bearsjay cutlernew york giants footballnfl footballnfl gamblingnfl gambling picksnfl thursday night footballsports newssports picksWeek 6 NFL Gambling Pick; Giants @ Bears
0 comment
0
Facebook Twitter Google + Pinterest