Costa Rica News – While you’ve likely heard about the controversial practice of shark culling around the globe in response to shark attacks, one surfer is taking legal action to compel the Costa Rican government to manage another type of marine predator: crocodiles. 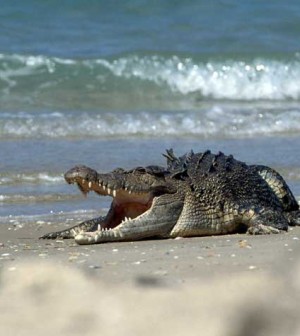 During the Essential Costa Rica Open — an event in the World Surf League’s Qualifying Series that took place last week — crocodiles showed up in the event’s lineup two of the five days of competition, forcing the event to be delayed.

According to the Tico Times, Becker’s was the third crocodile attack in the area since 2013, and the seventh attack in Costa Rica this year, one of which was fatal.

Now, Walter Brenes, a surfer and the director of Orange Wave — which organized the Essential Costa Rica Open — says he plans to sue the current Costa Rican administration because by failing to manage the crocodile population, it has negatively affected the country’s image as an attractive surf locale.

“I will be suing the government for negligence on behalf of the Chamber of Tourism,” Brenes told GrindTV over the phone. “The attacks have tourists scared to come here. In Tamarindo, in the North Pacific, we lost like seven percent of visitors because of the crocodile attack three months ago.”

Brenes said that while the country relies heavily on eco-tourism for industry, its government has no grasp on the crocodile population, and is effectively ignoring a very real problem.

“We’re looking for the government to do what’s best for us surfers and the people from other countries that come here,” said Brenes. “The government right now is doing nothing to control the crocodile population; they don’t even know what the population is.”

While the American crocodile is considered a “vulnerable” species by the International Union for Conservation of Nature, Brenes says that in many of the areas around Costa Rica, they are overpopulated.

“We’ve seen a big growth in population recently,” said Brenes. “We need to reduce the population.”

Given his career as a successful environmental lawyer, Brenes believes he can be successful in forcing the government to do just that.

“We are looking at solutions now. First, we need to know the real numbers,” said Brenes. “Then, the next step will be the relocation of crocodiles, and possible killing of more aggressive ones. I’m 100 percent sure we can be successful, because people down here know it’s a real problem.”

And he’s not alone in his assessment that there are too many crocodiles.

Juan Bolaños, a member of the Association of Central America Crocodile Specialists and a frequent consultant for SINAC, told the Tico Times he believes the country’s Environment Ministry needs to start culling more crocodiles.

Bolaños claims that, because many Costa Rican areas have seen an imbalance in the sex ratios of newborn crocs (more male crocodiles being born than females) not only are there too many crocodiles, but too many of the male crocodiles are unable to find mates, which makes them overly aggressive.

“There needs to be an institutional effort to get control of the population,” Bolaños said. “Any aggressive crocodiles need to go.”