Costa Rica News – Well another win for my favorite Costa Rican law enforcement agency the OIJ.  Just for future advice if you are kidnapping someone to pay off gambling debts do not go use the kidnapping money at the casino. Four Costa Ricans and two Asians were arrested by agents of the OIJ  on suspicion of kidnapping a citizen of Asia,  confirmed Francisco Segura the director of the OIJ. 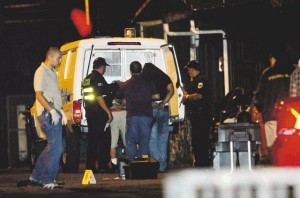 Foreigners are Hshiang and Yaozhong, and the Ticos surnamed Ramirez, Villalobos, Gomez and Charpentier. Three of the Ticos have a history of robbery, deprivation of liberty and illegal possession of weapons.

The victim was taken outside a supermarket in Escazú, where he arrived with a friend, and that days before had proposed a seafood export business to China.

Hours after the kidnappers called the man’s wife, whom he requested $ 200 billion (about ¢ 100 million) in exchange for his release.

Sunday, the kidnappers called back to the family, but are not able to agree with the amount, so they had a Spanish OIJ negotiator  to try to get a set amount

“On Monday at 9 am they started negotiating and demanded proof of life, so that the kidnapped spoke with his wife in their native language. He told them to speak in a dialect that the caregiver understand, “said Segura.

A day later they called and said they would kill the man and dropped  the request to $ 100,000. Because they did not get the amount on Wednesday they demanded the sum of $ 36,000.

Last night a friend of the victim traveled by taxi to the north side of the National Stadium in La Sabana, where he delivered the money. The OIJ confirms that this vehicle was followed by an Audi. Then the driver of the Audi met with two other men who were aboard a Nissan, Hyundai and a taxi.

At the boundary between Alajuelita and Hatillo, OIJ agents who were monitoring the Hyundai observed this when they released the kidnapped businessman, so they were followed and arrested. The other members were arrested when they spent their money in a casino close to Morazan Park and Alajuela.

“The debts are for gambling debts. He immediately went to play at a casino. It is believed that the victim always kept in Rohrmoser, “Segura said.

The investigation was conducted by agents Kidnapping Unit, Various Crimes Reporting Unit and the OIJ.

USA Military Leaders: We are Still Too Fat to Fight