USA Military Leaders: We are Still Too Fat to Fight

In a  few years China or Russia will be able to walk across the border and drag a hamburger and lead the people into a trap.  Childhood obesity isn’t just a health issue, according to a group of retired military leaders. It’s also a national security issue. 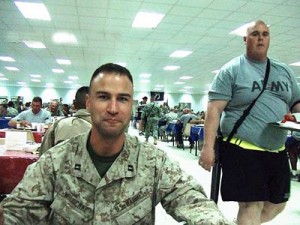 One in four young adults are too overweight to join the U.S. military, a new report from the advocacy group Mission: Readiness says. And the U.S. Department of Defense spends an estimated $1 billion each year on medical care related to obesity issues for active duty members, their dependents and veterans.

“No other major country’s military forces face the challenges of weight gain confronting America’s armed forces,” according to the report.

“At the end of the day, the reason America is safe and sound is not because of its tanks,” adds retired Lt. Gen. Norman Seip, spokesman for Mission: Readiness. “It’s really the men and women who volunteer and so proudly serve.”

Kids on average consume 130 “empty” calories a day from candy, cookies and chips, according to the U.S. Department of Agriculture. Mission: Readiness has been working to get rid of junk food in schools since 2010, when it supported the passing of the Healthy, Hunger-Free Kids Act. The act requires the USDA to update nutrition standards in schools.

Mission: Readiness believes having healthier food in the cafeteria and in vending machines will help slow – or even reverse – rising childhood obesity rates. And healthy children are more likely to grow up to be healthy adults who can serve their country.

“We’re not picking on the schools,” Seip says. “The schools are part of the solution. We like to think that this obesity problem… is one that’s going to require all of America to tackle.”

The Will Can Never Be Free