San Jose, Costa Rica –  Quepos is flooding. I wonder what kind of destruction happened on the badly constructed border road.  Heavy rains in the afternoon on Thursday left at least ten houses flooded in the La Inmaculada part of  Quepos. 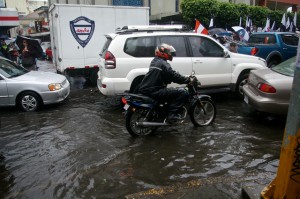 The rain started about 2:30 pm and had its greatest intensity about 4:30 pm when people began reporting the first floods.

Bemúdez Gerardo, a resident of the area, explained that several residents had appliances and furniture affected due to rising water level.

“Minutes later they had to call the Red Cross, which conducted a rapid assessment. But there were no injuries to report, “he said.

The neighbors also had to help a elderly couple, because the water they got inside the house.

Although it was reported that houses were unroofed in Parrita, the Red Cross said in this canton there was only heavy rain.

Charting the Course of the Costa Rican Art Museum