San Jose Costa Rica – Conavi the National Roads Authority does not seem to know how to build anything from the border road to highways, perhaps they should actually spend the money on construction instead of putting it in their own pockets. 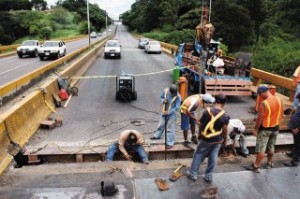 A lane from San Jose-Alajuela on the General Cañas Highway, is closed. In a stretch, which was repaired the previous week, showed a slump after heavy rains.

This was confirmed after a citizen called customer service  at 800 – transit.

“The collapse is presented in front of the residential Los Arcos in San Antonio de Belén. After the rains of today (yesterday) apparently the asphalt could not stand the weight. We are coordinating with Conavi, ” said the attendants.

They do not know how long this connection will be closed. Best estimate by the Costa Rican Times is a “a long dang time.”

The National Roads Authority (Conavi) carried out resurfacing a week before  in the area where the collapse occurred yesterday.

The Traffic Police said to  take alternate routes for people that go to the province of Alajuela.