Charting the Course of the Costa Rican Art Museum

“This is the year for me, I want to cover them up with personal projects, I want to paint, draw, graph and dance …See you. ”  That is the self-description of Richard Alfieri in his Facebook profile. And boy took it seriously because it burst over the responsibility for defining the direction of Costa Rican Art Museum (MAC). 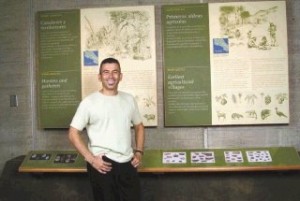 This artist, lawyer, cultural manager, and from time to time, dancer and actor, was named the new director of a cultural institution whose reputation has plummeted.

Culture Minister, Manuel Obregon, announced yesterday, through a press release, the designation of Alfieri as new head of the MAC in place of Florence Urbina, who resigned his post last May 30.

“We have chosen to Richard Alfieri in this position of trust and give all necessary support to strengthen the strategic plan drawn from the beginning of our administration in an institution as iconic and beloved as is the museum for our country,” said Obregon.

On July 2, Alfieri will captain a ship nearly sank in the waters of an administrative debacle dragged on for years.

The new director acknowledges that not an administrator, but appeals to his knowledge of the system “inside” after serving as president of the Board of Trustees of the Museum. And though he admits serious mistakes in the past, states that its mission is to recover the direction of the Museum as an institution ruler of the most important collection of Costa Rican art.

The lack of direction of the institution is the main concern of a group of citizens who in early June the Minister Obregon sent a letter in asking him to intervene in the matter.

Alfieri confirmed that one of his first actions upon taking office will set a date to meet with this group and hear their concerns. “My administration will be marked by dialogue. Consider fundamental the exchange of ideas and the next will invite them to mana a meeting, “he said