As the Costa Rican government sits back and points fingers at anyone but themselves in regards to where the money went that was supposed to construct the border road  properly, it is slowly falling apart.  The Costa Rican Times tries to point out scams being implemented and it seems that this was misappropriation of  funds at the highest level. 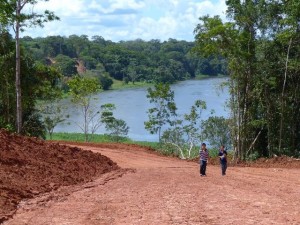 We are not much past the first month of rainy season with the hardest rains yet to come and it is crumbling.  Pretty soon it will be at a point where it all washes away and the Costa Rican government will pull a Tico and throw up their hands and shrug and say ooops guess it did not work with no consequences for anyone that was involved.

San Carlos, Alajuela could not stand and the first showers of the new rainy season.

The showers knocked out the bridge built on the broken stumps in Chorreras Cutris Venada, San Carlos.

The five-meter bridge was built by the excavation company in Victoria, who left the area because they were ordered to stop for paying of bribes to officials of the National Roads Authority (Conavi).

The creek overflowed, washed one of the fillings and the logs, which made of beams and at the same time were part of the floor, fell into the channel, which prevents the passage between Chorreras and Tiricias.

The accident causes the neighbors have to make an extra trip at least 20 kilometers, by taking another passage to get from one town to another.

Mario Cambronero, member of the Development Committee Chorreras said apparently there were mistakes made in building the bridge that made it very unstable.

“They did it very short. Instead of five must have been about eight meters long to allow a flood if the water does not form a dam, which was the case, said Cambronero.

But not only that bridge is damaged. Hereby confirmed on Friday the emergence of other problems.

In Tiricias of Cutris, the cracking of a slope covered with geomembrane, is set to collapse a light post laid by Electrification Cooperative of San Carlos (Coopelesca).

Between Marker 1 and Mojon San Isidro de Pocosol, there are landslides on the trail. Delicias de Los Chiles reported that one of the bridges, built with container and stumps and a bearing floor, could possibly be destroyed.

Climate Change – We are on the Path to ‘Worst Case’ Scenarios

It is never anyone’s fault here. Always the blame it on someone or God wanted it to happen. They also used containers then put dirt over them in some areas to make this road. Guess what? the are collapsing. Go Figure! Still the Ministers and bosses have their collective pocket full of money and laughing at the stupid people that supported them Shameful! Oh they will e back at the pig trough for more money to repair this road. Stupid officials will again give them money.. all on the workers hard earned money Shameful!