Costa Rica Travel News – The Museo de Oro (Gold Museum) is located in San Jose right behind the Teatro Nacional (National Theater). These buildings are in a lovely plaza area with black and white staggered concrete which looks like a checkerboard. It is easy to get to right off the pedestrian walkway through the center of town. 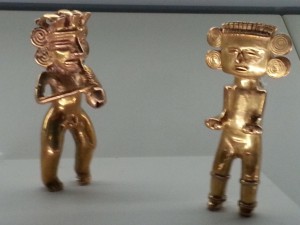 underground. You walk through the doors and pay on your left. It is hard to see at first so there is a guard standing there to guide you to the pay window. Prices are as follows:

After you pay your ticket, you are ushered through airport style security, although, thankfully you don’t need to remove your shoes. Next, you are pointed into a small room with lockers where you must store everything except your camera. Photos are allowed throughout the museum, except you are not allowed to use any flash photography. 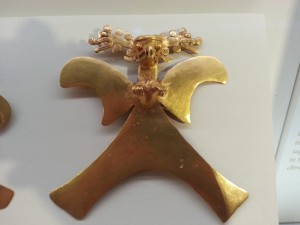 The museum was surprisingly very industrial looking with concrete walls, ceilings and floors. The museum was constructed in the 1950’s. The stairs leading to the two lower levels are a spiral pattern with the only thing warming the building besides the colorful exhibits is this special wood that is used for the handrails and is called Cenizaro Wood. It is native to dry and humid climates and can get 82 feet high. It is found on both coasts of Costa Rica. Currently, it is an endangered tree. It is a very beautiful wood and enhances the spiral architecture of the stairs.

The museum has the permanent exhibits of the Pre-Colombian Gold, and has some temporary exhibits to keep the museum fresh so that people may come each year to see new things. Today, I will discuss the permanent display of the Pre-Colombian Gold. The pieces date back from 300 A.D. to the 16th century. The amazing thing is that some of these pieces are extremely detailed which took a special knowledge to know how to heat up the gold to a temperature which allows gold to be molded into specific shapes, using only special rock or clay ovens and the intense fire from burning wood. Gold melts at 1063 degrees Celsius 1945 degrees Fahrenheit and one can only imagine the intensity and duration that a fire using more primitive methods must need to continually keep at to melt this metal.

The most common objects that were produced with this gold were humans, crocodiles, and birds. In addition to 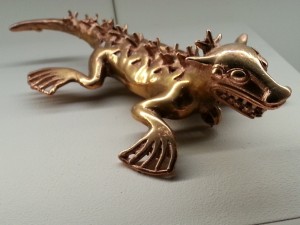 producing gold figurines, copper was also introduced as an alloy rather than utilizing pure metals at times. You can see the difference in the pink copper hue of some of the figurines.

One of my favorites is the man in the mouth of a crocodile! These indigenous people believed that illness was caused by aggressive animal spirit forms and would create sickness in people because they went against the norms of their society. A type of medicine man would try and cure the illness by utilizing the animal representations. On display is also a large gold nugget that was found in the southern part of Costa Rica in the Sierpe River Delta that weights 2.3 kilograms.

There were also grand necklaces and breast plates made from gold which would be worn by people of tribal importance most likely. The gold on display is beautiful and amazing in its intricacy. It is amazing that all this work was done purely by hand, from the gold panning by the people and then the creation from a flake of gold into something truly spectacular and artistic which dates back to such an early time in man’s history.

Next will be the temporary exhibits of the history of the Colon and how the architectural influence around Costa Rica ended up on some of the Colon pieces.