Like the rise of alternative medicine, organic food has emerged in our supermarkets over the last couple of decades as a viable and legitimate choice for consumers who wish to avoid eating foods produced using artificial fertilizers, pesticides and additives such as growth hormones. Champions of organic food tell us that it tastes better and is healthier for us. 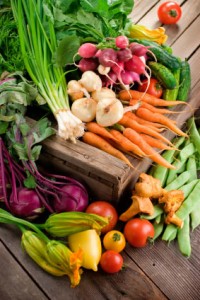 According to a study conducted by Stanford University earlier this year, the health benefits of eating organic food are doubtful ‘The researchers were unable to identify specific fruits and vegetables for which organic appeared the consistently healthier choice’. (Stanford University Sept 2012)

Evidence about the superior taste of organic food is extremely hard to verify – it depends on many factors such as the state of ripeness of the food, the growing conditions, the type of food and the taster. Apples and tomatoes are the foods that have had the most extensive testing and there is some suggestion the lower yields of organically produced food can concentrate the flavors, but this is not true of all foods. The conclusion is that each organic food has to be judged individually and ultimately by the consumer’s pallet. Take the Pepsi challenge!

The most serious concern I have about organic food is the economics of its production and its sustainability. Before the turn of the twentieth century all mass produced food could be said to be organic. The improvement in health from access to clean water and the fall in mortality rates led to a world population explosion. Traditional farming techniques could not support this rise without a new source of nitrates, which are essential for plant growth. The brilliant German chemist, Fritz Haber, invented a way to extract nitrogen from the air allowing the development of the first artificial fertilizers. Industrial agriculture was born.

Coupled with selective breeding in both plants and animals, the use of synthetic fertilizers increased yields and resistance to drought, pests and diseases. Without this intervention the twentieth century would have seen widespread famine and the starvation of tens of millions.

As far as the environment goes, from a chemist’s point of view there is no difference in nitrate produced artificially from nitrate released when manure decomposes. In fact, the use of synthetic nitrate is more controlled when farmers apply measured doses of fertilizers. The same cannot be said for natural fertilizers which can continue to release nitrates into the soil and groundwater long after harvest time. The rigorous testing of agrochemicals before they are certified goes a long way to ensure that harmful substances are not released into the environment.

Organic food costs a lot more to produce as it is labor intensive and results in lower crop yields. There is no way that the world population could be supported by organic farming practices, yet organic food sales in developed countries have risen exponentially. There lies the catch. The higher price of organic food will always be a socio-economic barrier to the poor, who care more about putting a meal on the table than whether the food was produced by contented animals raised on ‘chemical-free’ animal feed. Rather like the business of exporting mineral water half way across the planet- organic food will remain an indulgence of the affluent, who can delude themselves about its health and taste benefits. Non-organic food is here to stay- we just need to get better about testing and controlling what we put into it.