Costa Rica News – Who is surprised about this? Anyone? Anyone?  The fastest bill and or agreement passed by Costa Rican deputies was about their vacation for the Christmas holidays.  So at least they can all agree on not working for a month since they work so hard during normal business weeks.(sarcasm) 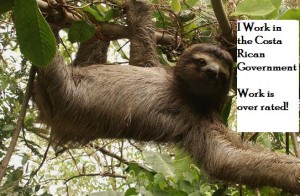 Deupties approved by a majority of its recess end and at the beginning of the year pledged to vote an agenda bills as priorities.

The break will run from December 24 to January 17.

However, the legislature week runs from Monday to Thursday….yep that’s right they have a 3 day weekend every single weekend…..so Thursday January 17th is the day the break runs to……meaning they will actually return January 21st. Oh forgot to add December 24th is a Monday so they will actually be taking off for vacation December 20th.

They said when they get back from vacation they will start signing bills and going over legislation.

Today is November 27th.  That means that they are pulling what you will see in most work places.

When it comes to call centers and other jobs where Costa Ricans work Monday through Friday. The schedule is like this:

Monday – Non-work day recovering from the weekend, retraining a Costa Rican their job

Tuesday – Retrain a Costa Rican their job for half the day, half day of work

Thursday – Half day of work, afternoon is spent thinking about the weekend

Friday – In the office but not working

You cannot really try to change this as they see the government doing the same thing.  However instead of being in the office and not working on Friday the government just calls it a holiday.  Also the non-working Thursday and Friday is exemplified by the congress saying from November 27th until when our real holiday starts December 20th we will not be doing anything, we will get it done after vacation.

Why don’t they just take off now? They do not do anything anyway.