Ghosts & the Supernatural – On this night investigated Angela Holguin’s home. Possibly one demon and 2 ghosts haunt this two story home. 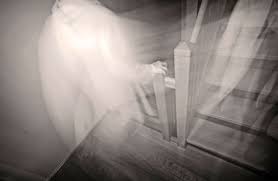 In 1980 a murder/suicide took place in this house. The former resident husband of the home killed his wife in the garage and he committed suicide upstairs using a shotgun.

The lady neighbor next door says that her house is haunted too and has strange high paranormal activity. 2 blocks down the road, near the Chuckwagon Park, a son killed his mom. This happened in 2016.

Down the street there was another suicide. Year this took place is unknown. About 5 homes in this neighborhood are considered haunted by the residents.

THE ENTITIES:
There are 3 entities in Angela’s home. 1st Entity: The Little Boy with Overalls – named Adam. Note: Adam wears clothes from the 1800s. Adam may possibly be from the former farmlands of Natomas. 2nd Entity: The Black Figure – this may be a demonic entity. 3rd Entity: The Laughing Creepy Girl.

ACTIVITY LEVEL:
Activity Level: High. Activity Explained: A black fan flew across the room 3 times, witnessed by the family. On one particular night, the TV remote control flew across the room. High activity is at 2am or 3am. On another night, the picture of Angela’s grand-daughter flew off the wall and came crashing to the floor.

One of the worst nights is when Angela was lying in bed asleep and possibly The Black Figure attacked her and left bite marks on her arm. A dark negative energy resonates in the home, causing the occupants to become angry. There is a dark thickness in the air. This dark energy affects the family.

Three knocks are heard on a nightly basis. Note: Deanna and I were preparing for the blessing of this home and the venetian blinds on the patio doorway started moving and swaying back and forth. There was no wind. Three knocks were heard on the back door, but this may have possibly been Angela’s dog.

TV flashes on and then shuts itself off. The cable box wil turn off and on. The laughter of a creepy little girl is heard, this is the third entity. Hotspot is Angela’s bedroom. Disembodied footsteps are heard in the home. Claw marks are seen inside the bedroom closet.

Angela has been pushed downstairs by the entity.

Christina sees a dark figure in the room that has tentacles. (Note: Sounds like she is describing Slender Man. Slender Man is a fictional character, but people are still claiming to have seen this entity that may have projected from the collective minds of many.)
When Angela asked the entity if he wanted to harm anyone, Deanna received chills throughout her body. EVP captured on the stairwell – unintelligible – male voice. EVP of a guy talking, but can’t make out the words. When asking the entity if he wants to hurt anyone and his answer was “yes”.

THE CLEANSING:
Deanna cleansed the home with palo santo wood and gave Angela a praying candle, palo santo wood, cherry weeping willow smudging wand. I conducted a Roman Catholic house blessing. After the cleansing and blessing the atmosphere of the home was light and felt cheerful.

More & More Kids Coming Back to Live With Their Parents