Costa Rica News – With the new direct flights from the UK to Costa Rica, it seems Costa Rica is wanting to promote investment from the country. 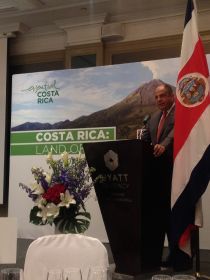 Costa Rican President Luis Guillermo Solis arrived on Monday in London, where he is expected to meet with government officials and business executives to promote investment and trade relations in his country.

Solis is scheduled to meet with British Trade Minister Lord Price and executives from British companies with interests in Costa Rica, such as Prima Fruit.

The Costa Rican leader said in an interview with EFE that his administration wanted to bolster bilateral trade with Britain.

Regarding the June 23 referendum on remaining in the European Union, Solis said a British exit “could have negative consequences,” adding that he “preferred” that the country remain in the trade bloc.

If a separation happens, “we will have alternatives to re-establish ties. But it is a decision that will have consequences and I would expect the British people would like to continue being a member,” Solis said.

“At this time, European and British investment in Costa Rica is significant,” the president said.

From the Latin American Herald