This is one of those things you hear and then say are you friggin kidding me.  The Costa Rica government knowing that it is corrupt at every level has decided to pass a prerequisite law that states that if anyone finds out they are doing illegal things then they are going to put them in jail. An article of law, incorporated on Monday, the Criminal Code prescribes a penalty of four to eight years imprisonment for those who “seek to take unfair or secret information policies.” 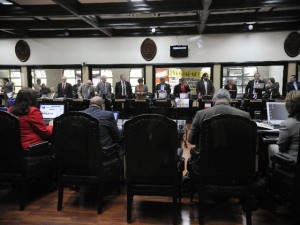 This is Article 288, entitled “Espionage” which was incorporated into the Criminal Code as part of an addition on Cybercrime.

The text was approved by the Legislature on Monday and obtained the signature of President Laura Chinchilla. Take effect after publication in the official Gazette .

The wording of this law provoked criticism from lawyers and journalists, who play constitutes a restriction on access and dissemination of information of public interest.

For exjuez specialist in criminal law and Ewald Acuña, the phrase “political secret information” may impose a barrier to the work of the press and a special court of protection for those engaged in political activity.

“How legally interpret that phrase? Political can be understood by all that has to do with political parties, people working in policy areas and information that transcends between them if you look at the case of the ‘memo’ during the discussion of NAFTA, that information is not could publish because there is a law that declares a veiled secret, “said Acuña.

For the lawyer access to public information, Carlos Tiffer, the enacted text is vague and contains a disproportionate sentence.

“The phrase I think of a vague and restrictive formulation, the only restriction in the Constitution is for information that is declared a ‘state secret’, also imposing a disproportionate penalty, without justifying it,” said the lawyer.

Alarm. The Board of the Association of Journalists of Costa Rica (Colper) expressed concern and convene next week to media directors to review the case.

“We think writing is a very suspicious and we analyze its legal scope. It imposes a minimum sentence of four years, which is not bailable, is a serious and disturbing issue, “said Colper president, José Rodolfo Ibarra.

The Presidency Minister, Carlos Ricardo Benavides, argued that it is not a gag the press and said the government agrees to push for clarification of the text of law in the Legislature.

“The Government would support a clarification to make explicit that are restricted only declared state secret information and that the rest of the information produced in the political and public office is public,” said Benavides.

The original draft of this law did not contain the controversial article, and only provided penalties for “espionage,” related to trade secrets.

The change was introduced in August 2010, the deputies of the National Liberation Party (PLN) Agnes Gomez, Oscar Alfaro and Edgardo Araya and libertarians Danilo Cubero Carlos Gongora, and the Social Luis Fishman.

Through a motion, legislators introduced a text that includes the phrase “secret information policy” and made a distinction between “intelligence” and “espionage.”

What libertarians Cubero and Gongora said yesterday that only accompanied by his signature on the motion, but claimed not to be the authors.

We attempted to obtain the version of the liberationist Agnes Gomez, whose name heads the motion to introduce the new text, but after that he brought the issue, the deputy did not respond to messages sent to you.

Chinese Sites are Starting to Sell the “iPhone 5”