Ghosts & the Supernatural – Now that Cuba is opened up for American citizens, its vacation time! The closest I ever got to Cuba is visiting Puerto Rico, Aruba, Jamaica, Haiti, Dominican Republic and St. Thomas.

Here are some of the stories of hauntings in Cuba, this one comes from the Ghosts and Ghouls website:

THE AFRICAN DIAPORA ORBS:
Grandma’s Black Magic: “My grandmother practiced extreme black magic and had evil spirits near her, some of them physically manifesting and audibly calling out my mother and uncle’s names in the middle of the night. She practiced a dark version of an African Diapora religion. I don’t know what she practiced exactly, but she opened gateways to all sorts of spirits that most African practitioners have never heard of. In Cuba, sometimes the malevolent entities at her house would appear as great spheres of light.”

GUANTANAMO BAY NAVAL BASE PHANTOMS
“Guantanamo Bay Naval Base, or GTMO, is full of ghost stories. There are stories of refugees losing their lives crossing the mine fields and stories of soldiers who never left their posts. I didn’t think much of the tales until I experienced something strange one night.

One night, around nine p.m. or so, I was in MOP #13 looking into the darkness when I heard footsteps coming up the metal stairs. I remember thinking how weird it was because I didn’t hear or see my staff sergeant’s vehicle pull up. I just figured he was trying to be sneaky and catch me sleeping. Anyway, I clearly heard the foot steps and a knock on the hatch signaling me to open the door. However, when I opened the hatch nobody was there. Needless to say, I was freaked out. I guess it could have been a dream, but I’m not sure. If it was, it was the most vivid dream I’ve ever had.”

Aunt Angel did not give me details of the hauntings in Cuba, but fortunately for me, I have a Cuban friend and he was able to tell me about the many ghosts of Cuba. 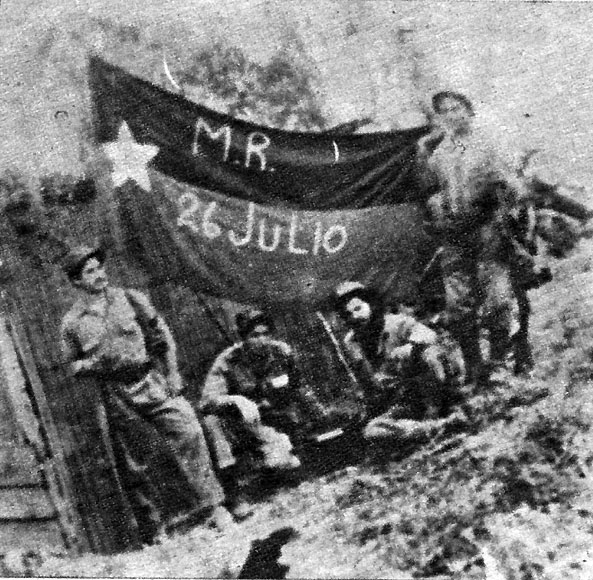 My Cuban friend Juan tells me that Cuba is a fun place to go. Walking down the streets you will see a 1958 Chevrolet in good condition of maybe a 1950 Chevy Impala in top-notch condition. You will feel like you walked backwards into time.

Aunt Angel says she and her boyfriend rode horses along the beach and Juan tells me the same thing. The great author Ernest Hemingway loved Cuba, he was known to follow the trails that Fidel Castro and Che Guevara once walked. Aunt Angel and Juan have nothing but great things to say about Havana. I push Juan to tell me about the ghosts of Cuba and he has this to say:

GHOSTLY GUERRILLAS OF SIERRA MAESTRA:
The mountain base for Fidel’s guerrilla war was in the Sierra Maestra mountain range and this area is very haunted. Late at night, witnesses have seen strange fog covering the landscape and when the fog clears, there are men that seem to be preparing for war as they crawl with their rifles through the underbrush. Sometimes you can hear ghostly gunfire and strange orbs zip in and out of the underbrush.

THE SPECTER SOLDIERS OF THE SPANISH/CUBAN/AMERICAN WAR:
Many witnesses claim that they see the soldiers of the Spanish / Cuban / American War battling it out in the fields. Some parapsychologists suggest that this is a residual haunting that replays itself over and over again. Residual means that it is imprinted into the atmosphere. The same type of phenomenon is witnessed on American Civil War conflict areas.

THE PINK GUAVA WOMAN:
Lurking around Fortaleza de San Carlos de la Cabana is an African woman. The natives call her the Pink Guava Woman, because she is carrying a large satchel of pink guavas and at times she is holding one in her hand and leans out with her arm holding the guava as if she is trying to sell it. At times witnesses have seen ghostly soldiers at this fortress. GHOSTS IDENTIFIED: FORTALEZA DE SAN CARLOS ETHEREAL SOLDIERS AND THE PINK GUAVA WOMAN.

THE CARCEL DE LA HABANA PRISON GHOSTS:
Late at night many witnesses, including Juan has seen prison ghosts at the very haunted Parque de Martires (Martyr’s Park) on the south side of Avenida de los Estudianes – this was the former Tacon prison built in 1838. Nationalist hero Jose Martin was once imprisoned there in 1869-1870. The Carcel de la Habana Prison was demolished in 1939 and the only things still standing are 2 punishment cells and the chapel for condemned prisoners that were facing the firing squad wall. Lucia Lopez, a vacationeer claims that she once saw a phantom firing squad and 3 prisoners leaning up against a wall. When the shots rang out, the prisoners collapsed to the ground. After the collapse, everything dissolved and the phantom image was no longer there.

THE HAVANA CHUPACABRA:
Noel del Toro, a friend of Juan says that Havana has its own Chupacabra and that there have been chickens completely drained of their blood. Witnesses have see a strange creature with scaly skin and small bat type of wings, large eyes, large head. One witness says that this Chupacabra jumped from roof to roof.

UFOS OVER CUBA:
Many UFOs are seen flying over Cuba. Cuba sits so close to the Bermuda Triangle, so it would make sense that the UFO phenomena is prevalent in Cuba. Here is UFO footage of a UFO over Cuba:
https://www.youtube.com/watch?v=QK50N7wc4Dc