If all goes as planned, this morning (2: 55 am, local time in Costa Rica) could begin a new era in space exploration.  This is the first test launch of a private spacecraft to the International Space Station (ISS), orbiting science complex at 300 km of land area and so far only been visited by ships belonging to U.S. agencies, Russia, Europe and Japan. 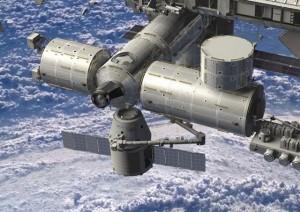 The new private capsule called Dragon and was developed by the company Space Exploration Technologies Corp (SpaceX), based in California, USA.

The plane measures 4.4 meters tall and has a diameter of 3.66 meters. It is white and has two wings of solar panels, extended, give it a wingspan of about 16 meters.

Dragon can carry more than 3,300 kilos and carrying seven astronauts on future missions. “The capsule’s heat shield protected the world’s most powerful, designed in collaboration with NASA and made ​​of a material called PICA-X”, explained their promoters. This was done to avoid future catastrophes during the warm re-entry.

Meanwhile, the rocket that propels it out of Earth’s atmosphere called the Falcon 9 and is about 48.1 meters high. The capsule Dragon travels on top of it.

The rocket used as liquid oxygen and kerosene fuel.

The mission of the unmanned flight is to transport food and water to the scientists who are on board the ISS. In all, carrying a load of 521 kilos per diem and return to Earth a load of 660 kilos of waste from the ISS.

“There is no doubt that this is a historic flight,” said Gwynne Shotwell, SpaceX president, founded in 2002 by billionaire Elon Musk Internet, co-founder of PayPal.

Expectations. SpaceX experts say, will be successful this mission, in the medium term (five years), commercial ships could carry astronauts to the station. However, NASA warns that today is only a test.

“We must be careful not to assume that the success or failure of commercial space flight will depend on this particular flight,” said Mike Suffredini, program manager at NASA. “The test flights do not always go as planned,” he said Suffredini.

In this regard, John Holdren, science adviser to U.S. president. States., Barack Obama, said that regardless of the result, the attempt planned for today is just the beginning of a new way of doing business for the space agency NASA.

“By giving the launches to private companies, NASA is freed to focus on exploration beyond low Earth orbit for the first time in 40 years,” he said, remembering that this is a transition that is expected over the past decade when the President George W. Bush decided to withdraw the fleet of space shuttles.