Movement of fluid, gas, magma below the surface and increasing fumarole temperatures, are some of the phenomena in recent days have caused an increase in seismic activity of the volcano Turrialba.  This was confirmed yesterday by the National Seismological Network (RSN) in a press release. 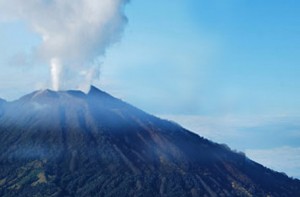 Raul Mora, a volcanologist from that entity, said that the behavior is different from what has been observed in recent years.

“These seismic signals which indicate that there is a movement of fluids beneath the volcano, are causing an increase in the seismic activity,” said Mora.

The expert said that every day the institution carries out studies and ongoing monitoring to detect changes in the behavior of the volcano.

“The volcanic alert traffic light changed from green to yellow for four days after the test we perform. However, we do not considerit is time to do an evacuation, “said Mora.

He said that the change of alert due to a very defensive. The yellow category is activated in case of probable eruption or strong changes in the eruptions.

Meanwhile, the National Emergency Commission (CNE) announced that maintains a green alert and for effecting monitoring in the area as well as training to communities.

The volcano began to show signs of activity on March 31, 2007, when neighbors reported eruptions of ash.Access to Turrialba National Park was closed between 2009 and 2011. On January 11 turned to prevent the passage through security.

Heredia Flooded with Red and Yellow