Two young men whose dreams are to help people with disabilities are more close to doing, having won prizes in a competition in which more than 1,500 students from 68 countries. Luis Gerardo Leon, Bagaces, Guanacaste, and Jose Miguel Gonzalez, a resident of Escazú, just outside of San Jose, Costa Rica, triumphed in the International Intel Science and Engineering Fair (ISEF) held in Pennsylvania, USA. States. 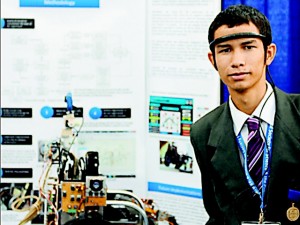 Leon took second place in the category of Electrical Engineering and Mechanics. This is the biggest prize that can be won by students from Latin America.

Young won the project “Intelligent Robot and System Integration with Special Disability (RIIS-ED)”, which helps people to cuadraplejia, or in a wheelchair, can move objects through a headset connected to a computer .

The headset works as a remote control. The person, just biting, commands the robot to move and place an order.

“The judges commended me much for the work and agreed that the project clearly represented people with disabilities so that they can achieve their dream,” .

This award was presented yesterday at the big awards ceremony of the ISEF.

Leon hopes this honor will allow this project to materialize and thus help many people with disabilities.

The delegation also met policy from the Thursday night another special prize: Gonzalez won second place in the category of Mechanical Engineering of the prizes awarded by the Patent and Trademark Society of the United States.

This device allows not only more cheaply printed texts in Braille, but also allows the paper to be reused again and again.

“We imagined that Costa Rica would have a big prize. We saw the judges go over and over again and make us lots of questions. I asked much the representative of the Society of Patents, which was the organization that gave me the award, “said Gonzalez. His desire now is to refine the technique and patent it.

This is the second time that young people participate in the Fair.

Last year, Leo designed another robot to handle hazardous chemicals so as not to endanger the lives of humans.

For his part, Gonzalez filed a vest that helps visually impaired people to play music through seven vibrators that represent the seven musical notes.