Facebook has announced through its developer blog that in the coming weeks is expected to launch an App center, ie an application space for the popular social network. This is expected to increase the value of Facebook even more than it already is, as the date for it to go public comes closer. 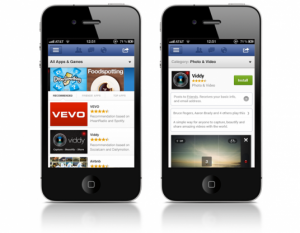 As indicated in his blog, this space will feature thousands of services available to mobile-and Android-IOS, web and desktop. All compatible with Facebook and advance registration is required.

This new system will work similar to that of its predecessors with outstanding sites for favorite applications and detailed pages on each program. The only difference is that you require to be downloaded, Facebook takes users to the Apple and Google: App Store and Google Play.

At the moment there are some applications that are known will be part of the Facebook application center as Draw Something, Pinterest, Spotify or Viddy.

In regards to the service cost, the inclusion of paid apps is still in development, as well as the possibility of implementing flat rate services to use the App Center.

At the moment not set an official date on which the service will be available nor in the countries where you can access the new App Center. Facebook has only revealed that the launch will occur in “coming weeks”.