“Before starting this research, we expected to see gradual changes in fauna and flora that are in the shallow waters to deep waters. However, what we see is a big change around 50 meters deep. ” It is amazing to see all the new plants and animal species that are being discovered during this research. 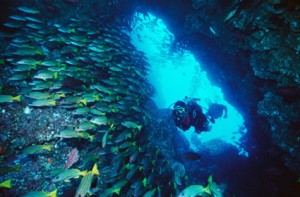 The words belong to Jorge Cortes, a researcher at the Center for Marine Sciences and Limnology (Cimar / UCR (San jose, Costa Rica). Since 2009, he and his team study the biodiversity in the depths of Cocos Island.

What they discovered so far is that this national park is quite another to more than 50 meters, which is where the so-called thermocline transition area where warm water masses converge with masses of cold water.

Although they are still processing data and describing the species, Cortes said to be new records for the country.

“There are new species records and has expanded the scope of depth of others. That is, they knew who lived up to some depth, but there are pictures taken of them in greater depth, “said the biologist.

To decrypt, scientists rely on the help of Deep See, a mini-submarine with an acrylic sphere of 8.4 cm thick and can get down to 450 meters.

According to Eli Temime, driver of the Deep See, a mini-submarine immersion can take hours if you go down to 100 meters, and two more hours if it is over 300 meters deep.

The Deep See is equipped with lights and a video camera in high definition. Temime records videos of five minutes that record the different species and the number of plants and animals.

Besides the videos, the mini-sub’s mechanical arm allows collections. “We have collected some 50 bodies of several species. We would like to collect fish as there are new species, but specimens are needed to describe and can not, “said Cortez.

Will also be taken as the location, depth, date, time of day, type of substrate and temperature. “This allows us to 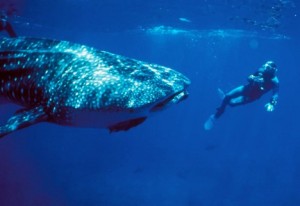 determine the distribution of species around the island, the depths where they live, where seasons are and at what times of day,” said the researcher.

Also, Cortes said: “We found that some species are only seen in some places and not others, at certain times and not others. Then we will try to explain why these behaviors. ”

With this, the scientist would say that the project is at an early stage where the end is the description. Therefore, prepare a catalog with photos, descriptions of species, distribution and depths at which they were.

“The catalogs will serve as a baseline of what lives in the deep waters of the national park,” said Cortez.

Another effort to know the sharks and rays that live in deep water is driven by researchers at Mission sharks.

According Ilena Zanella, using the submarine underwater Rangiroa counts are made at different depth intervals. The study area ranges from 40 to 300 meters at intervals that are anchored in 10 meters.

In addition to the videos recorded by the Rangiroa, data are taken as temperature, depth, species and number of animals.

“We were about 10 minutes at each interval. The idea also is to report whether the shark or ray is feeding, resting or having other behavior, “said the researcher.

Thus, scientists hope to describe the abundance and diversity of animals with depth.

Although it is early to give results, there are interesting observations. “For example, we saw a white tip sharks do not like the thermocline. They are always on this and when the temperature around 25 ° C, “Zanella said, adding:” We also saw a relationship of temperature with mottled stripe. He seems to like the warmer water. ”

Apart from setting research priorities, the scientists hope the information will help the rangers to make management decisions.

“Our idea is to identify sites most biodiverse than others, and view critical habitat for some species of elasmobranchs” said Zanella.