Ghosts & the Supernatural – When I was a young child, in Penryn, CA I can’t remember the exact age that I was, I believed in the world… I believed that there was no evil when I was just blind to it. I had black hair as a young girl. I remember that I was wearing shorts because it was in the summertime. I was spinning around in front of the door to my daycare talking to my spirit guide. I stopped dead in my tracks because I felt something staring down at me very hard. It took me a minute to look up but when I did I saw something incredible. At the top of my viewpoint is a pine tree that often dropped many pinecones. The lawn it was in was strange. 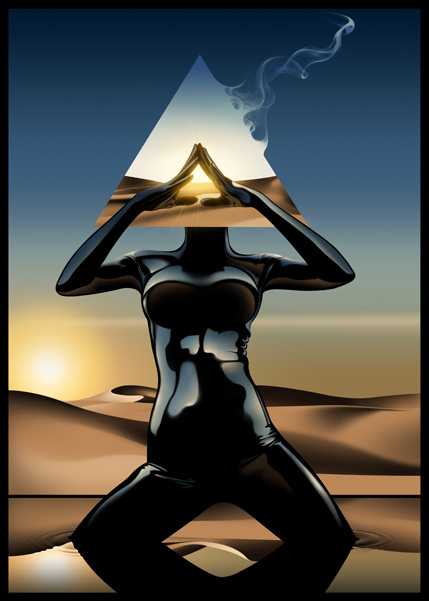 You could find a four leaf clover anywhere in this grass. I was paralyzed with fear. It was a giant eyeball that was the size at least of a tall building. It looked like it opened an invisible curtain. It was blue on the lids and in the pupil. When the eyeball saw me I couldn’t quit staring so it rolled its self back into its lid and it sounded like boulders rolling down a mountain. Than, it was if someone closed this invisible curtain and pulled the eye backwards. After this event I heard the gate to my daycare swing open and there was a white man with black hair staring at me. He had glasses and he seemed young like in his 20’s maybe I am not sure. I was sexually abused right than by him. So, obviously I have tried to heal from this experience my whole life and I am still searching. The thing about the eye is that it could be many things and maybe the same thing all at once. In different cultures and ages throughout the world. So, here is the clues I have collected throughout the years;

Four Leaf Clovers: The four leaf clover has four green petals. Many are mistaken for a four leaf clover but it is the green ones without any discolorations. The leaves are full and round. This clover has a huge problem with mistaken identities. The Irish symbology (in where they seem most important) the petals of the four leaf clover equal the holy trinity ; 1 for the father, son, holy ghost and the fourth represents God’s grace. In America we consider them tokens of good luck.

Eyeball: The eyeball that I saw was blue in color of course the whites of our eyes were also the whites of this eye. I could not tell you if it was right or left eye or just a single one on it’s own. The eye is considered to be “all-knowing” and called the Eye of God in mystical practices. The theory is that the eye knows and sees all. The act that was committed on me was evil and the Egyptians regarded it as a protective symbol. I was not protected from the evil but maybe I could have been kidnapped and killed had it not shown up? I cannot know.

As a child, I was very psychic. I learned not to talk about what I was seeing because my sister had shared a ghost experience and my family had started considering her crazy. The only things that I could not hide was my psychic dreams because I often woke others up from my shouting and crying. One time I caught myself levitating in a white light above my bed in the middle of the night. Where than I started to wave my legs frantically and freaked out until I was slowly lowered down as if by moonlight which was also shining through the window…

Or is this a UFO? I found my husband because I was looking for some spiritual guidance and I called him and asked him about it and his first reaction is that it is a UFO. He had worked military intelligence before (Paul Dale Roberts) and saw photos of UFOs from the government. The sounds that it made and the weird rolling motion was almost mechanic when I thought back to this instance. Could there be a royal race of magic aliens? It seems incredible but than I think back to that night in the moonlight was that also a spaceship and than I have misplaced memories from childhood about a doctor and than its in the middle of a K-mart and the curtains are clear and I’m naked and than it doesn’t make sense. My mom was there in the memory but she cannot remember what I speak of. Also in the room where I levitated was this electronic black horse I called Black Magic. He would turn on in the middle of the night frequently power off and on and it was loud so it would wake me up. Was this an electromagnetic field or a haunting? Than that invisible curtain that I saw must have been a field wrapped over Earth that it penetrated deeply.

The Eye of Horus is a symbol of protection, royal power and good health.

The name for the eye derived from the eye of a cobra. Hence when a cobra rose in protection. Ancient sailors would paint this eye on their ship for protection.

When I first saw this my first thought at the time was that it was a giant’s eye. Was this a Cyclops looking into our dimension and did it enjoy the misery I went through? Why was there only one eye staring at me? Was that all it had or was there more?

One thing that I know is that it has been seen and worshipped before. I do not know how the conclusion came upon ancient peoples that it needed to be worshipped but it is causing me great speculation and I am not satisfied with the answers because I am looking for the truth. The truth is out there!