Costa Rica Entertainment The black bull charged out of the chute bucking and twisting to throw its rider. And that’s where the similarity between a rodeo in Costa Rica and one in North America begins and ends. 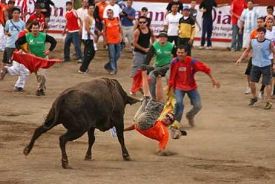 Indeed, the Costa Rican rodeo can best be described as a mixture of traditional bull riding, bullfighting and running of the bulls.

We heard about the “Toros a la Tica” from our taxi driver, and jumped at the opportunity to experience some local flavor.

So after a $12 admission, we were sitting on a wood bleacher, trying to make sense of what we were seeing.

In this ride, the cowboy lasted about 8 seconds before falling, long enough for a score in the United States, but meaningless here since Costa Rican riders stay on the bull as long as possible and are judged on a combination of factors, including crowd reaction.

With the rider struggling to stand, another man ran toward the Brahman bull, waving a red cape reminiscent of a Spanish bullfighter’s muleta, though in his jeans and baseball cap he looked nothing like a matador.

Once the rider was safe, a mariachi band began to play and dozens of amateur bullfighters, or “improvisados,” circled the bull in a game of chicken with the potential for deadly consequences.

It charged a man waving an orange towel with one hand, carrying a beer with the other. He sprinted out of harm’s way, then circled back behind the beast, flicking its rear quarters with his towel.

But the bull was spent. He ignored the daredevil and trotted to the gate, where he was let into the holding pen.

During breaks between riders, vendors peddled drinks, churros and cotton candy. One man sold cups of spicy mango salad from inside the arena to those sitting in the most coveted location — atop the arena fence, where they sat with their legs dangling into the ring.

The evening progressed with more adrenaline-seekers — including a few tourists — joining in taunting the bulls. No one was hurt, though we were told it’s not uncommon.

According to the Costa Rica tourism board, the precursor for these events dates to Colonial times. Ranchers couldn’t afford to lose a bull for sport, so the tradition stayed distinct from Spanish bullfights in which the animal is killed.

Today, Costa Rican law makes it illegal to harm the bull. Still, there are occasional protests by animal-rights groups. These were especially vocal last fall when the first American-style rodeo was held. Currently, no repeat of the “Extreme American Rodeo” is scheduled.

As for the Tico bullfights, the largest are held near San Jose in late December and Liberia in late July. But many of them are true community festivals that include fundraising activities for civic improvements such as parks and soccer fields. The best way to find them is by asking the locals.

As our rodeo drew to a close, the announcer introduced what he called the country’s fiercest bull. The tension mounted, more people flooded into the arena, and the beer flowed (though it’s illegal for participants to be drunk.)

It was by far the most aggressive bull of the night. After throwing the rider, it continued to pitch and lunge. In a terrifying moment, a bullfighter fell as he dodged a charge. The bull bucked right over him, missed him as it landed, then chased someone else. Eventually, the bull was lassoed and led from the ring.

The evening ended abruptly, with the fireworks having been shot off in the middle of an earlier ride, as if someone hit the detonator prematurely.

It’s not how it’s done in the States, but like the rest of the Costa Rican rodeo, it was unique.

Award-winning freelance writer Karen Schwartz is based in Colorado. On Twitter: @WanderWomanIsMe