Fifteen meters upstream, a merganser mother preens on the rocks as her three chicks play in the shallows of the creek. Out of the water she appears quite large, irrespective of the brown baffle on her head. Her spotted brown chicks, on the other hand, are tiny in or out of the water. 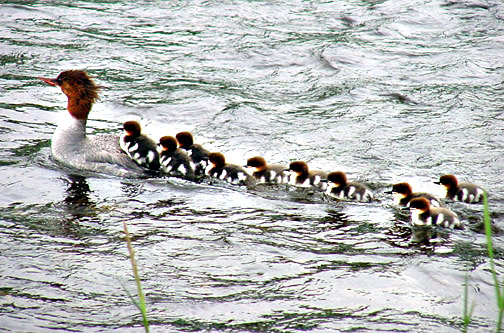 A steep bank, dense with brush and ivy, shields the mother and chicks from the runners and cyclists on the park road above them. Fifty meters upstream a mallard couple sits on the stones in the middle of the shallow creek, indifferent to people going by in full view.

After about 20 minutes, the merganser leads her little troop upstream through roots and downed branches along the edge of the creek. She plies the water as she swims against the current, her head just below the waterline as she scoops for insects. The plume of feathers along the crest of her cranium throws off the water so efficiently that it doesn’t appear wet when she raises her head.

For most of the sitting in that fairly secluded spot of the park, a gray squirrel perches silently in a nearby branch overhanging the creek. It seems to never take its eyes off one, and every now and then it taps its foot nervously.

Toward the end of the hour, small pieces of fruit begin falling from the tree over the creek. At first they splash into the water at a surprisingly rapid rate, but then they begin falling around and even on one. The squirrel is eating, and it’s either making a gift or a statement to the human sitting in its territory.

Imperceptibly, the mind/brain leaves the stream of time. Time, which has no meaning without the clock outwardly, and becoming inwardly, simply stops. The rippling water envelops one, and content-consciousness recedes into the petty thing that it actually is.

Awareness and stillness put one deeply in touch with the ever-present actuality of death. Without a trace of morbidity or fear, the fact of death feels as close as the water and stones. Immersed in the fathomless ocean of death, one is regenerated and renewed. Truly, as the great teachers have taught, to fully live, one has to learn how to die each day.

Operating in the continuity of thought, the brain becomes encumbered and encrusted with the past, and thereby grows old. If one passively but energetically observes the entire movement of the past within one without any separation, attention gathers, thought spontaneously stops and the brain is renewed.

Would the incidence of Alzheimer’s be significantly reduced if people learned the art of meditation, which has nothing to do with techniques and methods of quieting thought? How much does the unnecessary accumulation of memory in thought and emotion as we age contribute to dementia and Alzheimer’s?

The contemplative’s concern is with the ending of thought and time. Not in the cloister of the monastic’s world of tradition and ritual anymore, but integrated into ordinary daily life.

To me contemplation means that intense and effortless quality of being in which there is an essential stillness and emptiness of everything known and experienced. 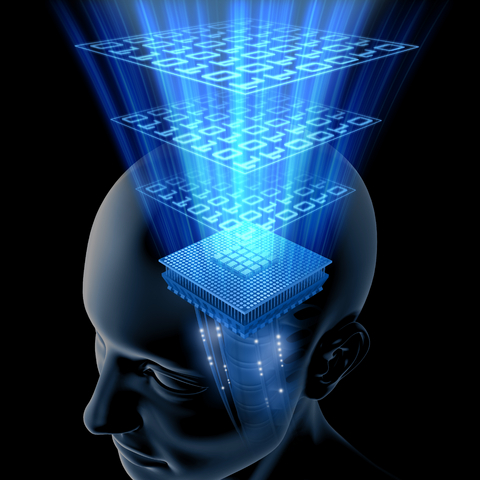 Reincarnation is a fact but not the truth, so stillness and emptiness apply to this and however many previous lives one has lived on the wheel of human ignorance.

Doing philosophy, on the other hand, obviously requires thinking. It may be thinking that arises from and is anchored in questioning and observing, as opposed to knowledge and tradition, but it is still thinking.

As both a contemplative and philosopher, I have long grappled with the right relationship between these two seemingly incompatible dimensions of one’s being.

In my view, doing philosophy is similar to the scientific enterprise at its best, in that there is a drive for insight into the big questions. Unlike science however, true philosophy does not rest on or presuppose knowledge as a means or as an end.

As the ancient philosophers pointed out (although Western has largely lost sight of it), philosophy is not about the acquisition and expansion of knowledge, but the growth of insight, understanding and wisdom.

Can thinking, which is obviously essential to doing philosophy, take place in the context of emptiness? As the observer precludes true observing, doesn’t the thinker preclude true thinking?

Normally thought arises from and adds to the increasingly dark current of the past, individually and collectively (which at bottom are the same thing). When the mind is completely quiet however, thinking and feeling arise from and fall back into the infinite ocean of silence.

Can one dwell in that state? Why does the past, as cumulative experience and psychological time, return?

Property of the Week – Beachfront Condo in Jaco (Video)