Latin American News – A strong earthquake of 7.4 degrees on Wednesday shook Central America and Mexico and left at least 39 dead, 155 injured and dozens missing in Guatemala, as well as trigger tsunami alerts in El Salvador and Nicaragua. 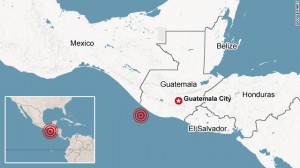 “We regret the death of 39 people (…) This is data that we need to reconfirm, but for now it is already a number that unfortunately finding out from this earthquake,” said President Otto Perez during a visit to the most affected by the earthquake.

The quake, measured7.4 degrees and occurred at 10:35 am (Central), centered in the Pacific about 24 miles southwest of Champerico, Guatemala, at a depth of 41 km said the Seismological Service (USGS).

The head of state said that all the dead are reported to six municipalities in San Marcos, located about 250 km west of Guatemala City and the border with Mexico.

It is also reported that another 155 people were injured and 131 homes destroyed in the same area, this caused 11 shelters to be maxed at 800 people.

Perez has reported the existence of 15 people trapped under rubble and that they are looking for more than a hundred missing.

In San Pedro Sacatepequez, village near the provincial capital San Marcos, at least five cars and pickups have been  crushed by falling walls. Other pictures showed roads damaged by falling rocks.

Several hours after the earthquake communication problems persisted with the area because of the loss of telephone lines. There were also power outages.

We can only pray for those who are out of house and home and are trapped in the rubble.