Costa Rica News – Well on the hierarchy of importance to the Costa Rican government, children and education obviously rank very low on that list.  This is such a stupid “wanna be solution” to this problem. 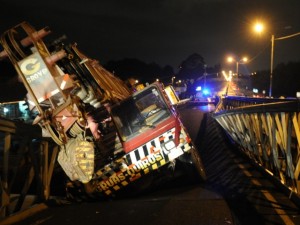 So here is the sequence of events the highway was constructed incorrectly, there was an enormous hole that formed in the highway, a temporary solution of bailey bridges that now seems permanent, a illegal vehicle damaged the bridge, and now in order to fix the bridge the government has given children a 4 day weekend instead of announcing alternate routes.

The government announced this morning that it is going to give two-days off next Friday and Monday to schools in Heredia and Alajuela to lighten vehicular traffic on the General Cañas highway, after the accident that damaged the bailey bridges on the way from San Jose to Alajuela .

Chacon said that 150 officers of the Traffic Police are responsible for regulating the passage “to contain the traffic chaos.” Miguel Carabaguíaz of Incofer advised that they will increase the frequency of  the train schedule between Heredia and San José.

The Government confirmed that the Ministry of Public Works and Transport (MPWT) will initiate an investigation to determine what responsibility will be attributed to the company that owns the damaged vehicle.

According to the minister explained Pedro Castro, the driver of the crane-Alberto Marin violated 14 traffic laws.

The government called on the Comptroller General’s Office to expedite the granting process for the construction of the road San Jose-San Ramon to the company OAS.

The government estimates that repairs to the sinking of the General Cañas will be ready on Tuesday November 13. The two bridges from San Jose to Alajuela will continue to be open. So the road is open but they think they cancelling class will lessen the traffic, not likely.

I would love to know how the brain of the government officials can not function at all. Two Words: Functionally Retarded