For your morning mystery, The New York Times’ Fernanda Santos brings an arduously reported story of a man’s death in the Arizona desert after he and his wife were expelled from a silent, three-year yoga retreat. The striking thing about the tale isn’t how Ian Thorson died — he and his wife Christie McNally had left their small retreat and he apparently died of dehydration, not any kind of foul play — but simply the level of drama that can arise among 39 people who don’t speak. 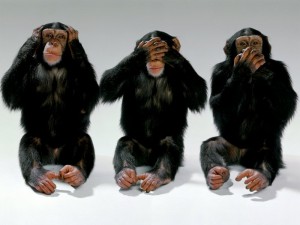 The Diamond Mountain Buddhist retreat, which the couple left in February after participating for a little more than a year, has been painted as a cult led by diamond seller-turned-monk Michael Roach, to whom McNally had secretly been married before she married Thorson. Somewhere along the line Thorson and McNally apparently had some kind of violent falling out, but the details are hard to come by because everybody involved has taken a vow of silence. The Times’ Santos writes:

Even the manner in which Ms. McNally and Mr. Thorson left the retreat adds a fresh turn to an already twisty tale. It came days after she made a startling revelation during one of her lectures: she said that Mr. Thorson had been violent toward her, and that she had stabbed him, using a knife they had received as a wedding gift.
Most of the information Santos got for her story comes from critics of the retreat, including Thorson’s mother and a Toronto yoga teacher named Matthew Remski, but there’s one letter from McNally, posted online, which describes the stabbing incident as an accident. There are still about two years to go in the current three-year and three-month silent retreat, and until it’s over, the details of what exactly led to Thorson’s death will likely remain sparse.

Foreigner Bribes $10,000 to Police after Arrest with Cocaine