Foreigner Bribes $10,000 to Police after Arrest with Cocaine

San Jose, Costa Rica – After being caught with three kilos of cocaine by the Tibás Police, a foreigner, apparently offered a bribe to an officer of 5 million colones or about $10,000 to let him free with his accomplice. I am completely amazed that these cops did not take the bribe, or perhaps it was to obvious the way they did it for the cops to get away with taking the money. 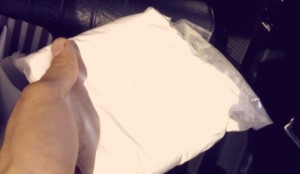 The arrest of two people suspected of transporting drugs in a vehicle occurred on Monday at 7:30 pm in the residential Roses in San Juan de Tibás, San Jose.

Authorities identified the suspects as Uyuela, who was driving the vehicle and another man named Serna, 29.

Arias explained, two officers on patrol observed a car Hyundai Tucson, gold, parked near the local cemetery, which is why they decided to move closer to find out what they were doing there.

According to the Public Prosecutor’s report, the officers requested the documents and found that subjects carrying a briefcase, in which they found three packages of cocaine that contained a kilo each.

According to the deputy police Juan Carlos Arias, when an officer was handcuffing Serna, the latter said: “Officer, help me and I will give you five million colones.”

According to the Public Prosecutor’s report appears to the outsider tried to offer the officer let him release him and his accomplice.

Celso Gamboa, Vice Minister of Security, said: “The officer flatly refused the bribe and  reported on what happened to his superiors.”

“It’s no secret that one of the strategies of drug dealers, is to do so through the acts of corruption. The direct line of contact for them is the police and that can not afford, “said Gamboa.

The two individuals were the order of the Office of Drug Trafficking, where they were questioned yesterday.

The story does not hang together. Searching a car? a brief case?/ I have been stopped many times over the years. Never asked to open a bag and or search the car. been asked for papers and license. Asked if I was carrying a weapon and had permit. You wonder how many are offered and accept a bribe? I guess the going rate more than 5 mil colons. Just so happens they look into a brief case. I do not think so!