Costa Rica News – Legislation was put into effect 2006 and reviewed and re-established in 2009 to try to prevent marriages of convenience in Costa Rica.  These laws have worked when it comes to most foreigners, but with enough money, paying off enough people, and enough patience you can get around anything in Costa Rica, so do not see this as a complete road block. 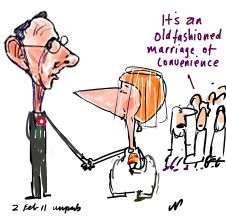 The marriages of foreign citizens in Costa Rica declined almost 30 percent since 2006, when it went into effect a new immigration law that imposed rules against outsiders who married just to get residency in the country.

That law was repealed in 2009-by-considered abusive and replaced by a more moderate, but hardened requirements for immigrants married to Costa Ricans could stay legally in the country.

Since then, the number of foreigners with national unions began to descend.

The number of marriages of foreigners and Costa Ricans or naturalized immigrants residing in the country has gone from  7126 cases in 2006 to  4,799 marriages in 2011. This number could be that not as many people want to come here and live anymore though, lol.

“Previously, many people saw this as a legal practice and it was tolerated. The fight we took ended up being effective, “he said.

Before 2009, a foreigner who married a tico almost immediately acquired the right to permanent residence in the country. No need to present to Immigration-could be represented by a lawyer, nor required to prove the authenticity of the marriage.

Now, they must demonstrate that they know and live with your spouse and have to report to Immigration every year, the first three years of marriage, to prove a married life, and to acquire permanent residency.

The final blow was by  Oscar Arias in November 2009, when he signed an amendment to the Criminal and Family Code and said there was to be a sentence of prison for  lawyers, witnesses and spouses participating in sham marriages to obtain immigration benefits.

This law was in essence to make it a little harder to get residency, and have to have a a little more financial resources to to go through the process.  With the higher costs and time and effort needed it knocked out some of the people that wanted to do this.