Costa Rica News – We all know that being on time is something that is seen as very unimportant in the Costa Rican culture. My thought on this is being late shows absolute disrespect for someone else by saying that your time is not as important as mine.  This story however put someone’s life at risk. 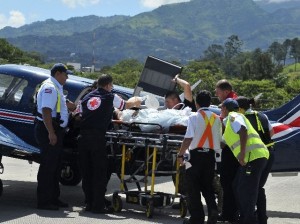 A Red Cross ambulance took 25 minutes to pick up a teenager who arrived yesterday morning in critical condition flying from Tobias Bolanos Airport Hospital in Puntarenas to be treated in San Jose.

She suffered a traffic accident Friday night in the town of Coyoche in Puntarenas, and was first brought to the hospital in that area.

However, she needed to be moved to San Juan de Dios Hospital (San Jose) because she developed complications.

The Aviation Security Service of the Ministry of Public Security is responsible for mobilizing the youth in the plane, in the  Tobias Bolaños airport.

However, when the plane landed in Pavas at 10:10 am, the ambulance had not arrived and the patient had to wait on a stretcher inside the aircraft.

It was not until about 10:35 am that the Red Cross ambulance showed up and took the patient to the hospital.

The youth was given oxygen and serum. She was accompanied by Dr. Yency Barboza, Neily City Hospital, and the nursing assistant Margarita Duarte.

When asked, Guillermo Arroyo, director of operations of the Red Cross, said he was unaware of the case. He added that the Red Cross has an agreement with Air Surveillance and when patient transfers by plane to the Juan Santamaría.

So the director of the Re Cross just denied knowing anything about this case and there will be no consequences.

If you ever get caught doing something wrong as a member of the Costa Rican government, just say you did not know, throw up your shoulders, and shrug.  You will not be questioned any more than that.