I didn’t know what to expect yesterday at my sitting spot in Lower Park after coming upon a young man smoking pot there a few days ago. But I was surprised to find that he had meticulously erected 20 miniature Tibetan stone stacks just to the left and right of where I sit. 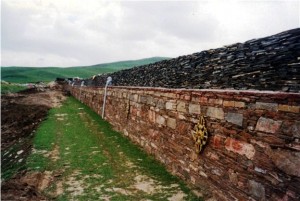 The little ‘stupas’ in front of me were from 3-7 stones high, carefully chosen and constructed in ingenious ways; for example, using tiny pebbles to establish a flat surface under a larger rock.

I felt quite moved, though I’m not a Tibetan Buddhist or any other kind of Buddhist. Despite or because of his high, he had obviously sensed something there, and responded in this way. Of course he may not have been fully conscious of it.

Having taken many sittings that ignited deeply meditative states in that place, I had wondered if some trace had been left behind. Now it seemed clear that awakening a benediction consecrates a place. But what is benediction, and can anyone awaken it?

Just as pressingly, given the destruction of the Tibetan people and culture by the Chinese government and Han people, what relationship, if any, does the benediction have to the world as it is?

As the New York Times reported today, another six young Tibetans set fire to themselves this past week. That brings to 69 in recent months (56 of them fatal) the number of people taking this extreme and gruesome form of protest against the destruction of the Tibetan people and culture.

“The apathy is appalling,” said Zhang Boshu, a political philosopher. But that condition doesn’t just apply to Chinese intellectuals and liberals, as the Times narrow-mindedly reported, but to Americans as well.

Autumn, such as it is in northern California, is at its peak, and the yellows, golds, oranges, and reds of dying foliage are plentiful throughout the parkland. Within a few weeks, the rains will come and the creek will rise. It will swell into an undulating torrent, sweeping away the small stupas as easily as the new-fallen leaves.

When the mind-as-thought is completely quiet in effortless attention, and the brain is fully alert and the senses fully alive, something comes that can be called benediction. One cannot seek it, but without it life becomes barren.

In it there is innocence, blessing, and holiness beyond words and description. Neither atheistic rationalists nor theistic believers know it, because both the reasoning mind and the believing mind have to be utterly negated for it to be. 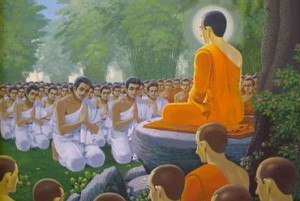 Though the benediction requires a very self-aware and silent mind/brain, it isn’t in the least personal, and does not belong to the individual. I can no more hold or identify with it than I can hold and identify with the waters of the stream. It is when I am not.

It must have flowed like the Ganges for the Buddha, but it’s said that only two of his disciples, Sariputta and Mogallanna, got it after 50 years. Though I have felt intimations or more of the benediction for many years (literally being unable to move when it is very strong), I’m sure that it is for everyone who does the spadework of self-knowing and learns the art of right observation.

As rare as it is for human beings to fully awaken and flower in benediction, the human brain has the potential to be in communion with an infinite holiness within and beyond nature and the universe.

That doesn’t put man at the center of anything, but it does mean the human brain is significant, and has meaning in the universe beyond the accretions of knowledge and devices of technology.

A place where meditation has truly taken place and the benediction has come is blessed, and the ground grows holy. (I wonder if that also can apply to churches, where one finds atmospheres, but no benediction.) Spiritually sensitive people can feel something special in such places in nature; they offer solace to the troubled, even if the troubled is the one who brought the benediction there previously.

But even if many people, inside and outside of China, brought the benediction into human consciousness, would that end the “cultural genocide” in Tibet?

The communist party’s outgoing general-secretary, President Hu Jintao, in passing the baton (or rather the club) of power to Vice President Xi Jinping for his ten-year term, delivered a stark warning about fighting rampant corruption in China. But what greater corruption is there than the destruction of a people and culture?

Though the immolations in Tibet were taking place thousands of miles away, security guards held fire extinguishers between their knees at the opening of the once-per-decade party congress in Beijing. And in Tiananmen Square, 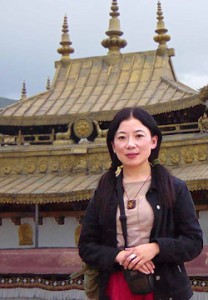 “firefighters stood at attention with fire extinguishers at their feet,” the Times reported, though their photographer was forced to delete pictures of it.

The fundamental fragility of the Chinese communist government, and the indifference and complicity of the majority Han in the destruction of the Tibetan people and culture, is strikingly demonstrated by such measures.

A blogger of mixed Tibetan and Han ancestry, Tsering Woeser, quotes a well-known Chinese proverb that speaks to the root of the problem not only China, but in human nature: “If you are not of my ethnicity, you cannot share my heart.” Many Chinese see Tibetans as the “other,” and “the Han are obsessed with issues of sovereignty,” said Ms. Woeser. That primitive mentality, wherever it exists, must end for humankind to survive and flower as a sentient, potentially sapient species.

So what does the benediction, brought by tradition-less and methodless meditation, have to do with psychological revolution and political manifestation?

Moments of benediction stand alone, completely distinct from this world. But without it, there can be no psychological revolution and political manifestation.

And there is great urgency to awaken benediction and ignite the revolution–the Tibetan people and culture are being destroyed, and with them, humankind.