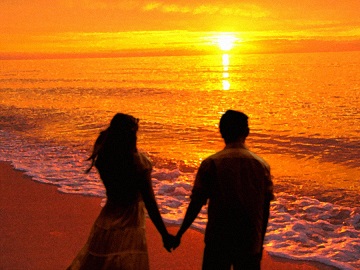 For the ranking, 14,000 people living in 195 countries were polled and countries ranked accordingly.

A scan of the top 10 list reveals a common thread when it comes to the best countries for either finding new love, or rekindling an old one: sun-soaked, tropical destinations near the equator, far from frenetic rat races found in bustling metropolises.

Survey results also showed a few interesting trends. Single expats looking for love are more likely to strike it hot in countries like Thailand, Indonesia and the Philippines, which posted the highest per centage of expats who reported meeting their partner in their new host country.

Of the top 10 countries, expats living in Panama and Costa Rica are most likely to have a partner from their country of origin, the majority of whom are also more likely to have met them back home and moved together.

In Malta, Israel and Panama, one in three expats reported being in a relationship with another expat.

Overall, Portugal, Malta and Israel skewed more heavily towards females, with more women than men reporting, while Thailand and the Philippines had a much higher per centage of male respondents (65 and 74 per cent respectively).

Ecuador also topped InternationalLiving.com’s annual Global Retirement Index to be named the best place in the world to retire in 2015.

Here are the top 10 expat countries for love: