San Jose, Costa Rica- I am assuming that the Costa Rican government needs to pretend like they are trying to prevent the shark finning from time to time. A patrol of the National Guard (NG) intercepted the boat Elizabeth X carrying 58 shark fins detached from the bodies of the sharks. The discovery was made by the patrol Juan Mora yesterday 10 nautical miles (18 kilometers) southeast of Punta Banco de Golfito, Puntarenas. 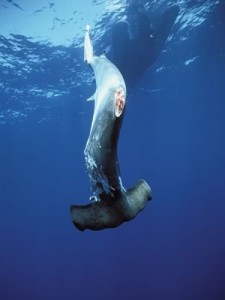 The officials were patroling the area to prevent illegal movement of drugs and illegal fishing.

The Ministry of Public Security reported that when officers intercepted the vessel Elizabeth X and proceeded to inspect the fridge, they found the package of shark fins, but never found the bodies.

The patrol immediately proceeded to arrest all three occupants of the boat names that are Umaña Alvarez and Diaz Salazar Espinoza Quiros, who offered no resistance. Of curse they were not the Taiwanese fishermen.

According to the Law on Fisheries and Aquaculture, number 8436, this is considered a crime because the fins are completely detached from the body of the shark and shark unknown size.

Article 150 of that Act provides a penalty of 5 to 15 base salaries to holders, store, cultivate, transport, market or illegally industrialize products and aquatic flora and fauna, under section section 139 is punishable six months to 2 years in prison to whom permits, orders or authorizes the discharge of shark fins without the corresponding body or stem.

Once the fins are separated from the stem and the shark size is unknown it becomes an illegal product.

The ship Elizabeth X, suspects and evidence were transferred to the Coast Guard station in Golfito, for submission to the Attorney

Coast guard should have sunk the boat along with the help. Shameful and Lady Laura seems alright with this.