Well Laura Chinchilla is showing that she is the true politician.  With Jose Maria Figueres about to propose a push towards green energy in the country as the head of the Carbon War Room, Laura needs to throw some hot air out there with no research or business model to back her statements of wanting the same thing as Figueres.  The more and more garbage that comes out of her mouth amazes me and I am used to the BS being promised by US politicians. 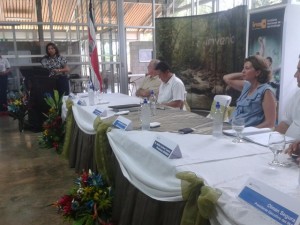 The first activities of President Laura Chinchilla on tour in the province served to throw a message in favor of development based not only on tourism.  Great idea considering her laws and actions are pushing tourists out of the country.

With the opening of an international baccalaureate program at the College of Bagaces and the signing of an agreement to facilitate the development of clean energy in Cañas, the president wants the economy by one-way bet Guanacaste beyond traditional tourism.

While admitting the need to continue to have a “quality tourism” Chinchilla said that “the true vocation of Guanacaste” is closer to the power generation resources such as wind, water, cane sugar and rice. This was said in Canas during the signing of an agreement between the National Training Institute (INA) and a private school called Invenio technical education.

This was the four of the agenda applied during the first day of his trip to Guanacaste. In the morning the school held Bagaces be the first to have international baccalaureate, which allows kids to graduate with a good level of English and French.

In this school, the mayor of Bagaces, Luis Angel Rojas took the opportunity to ask the Government to help with a school ground, arrangement of roads and housing projects move forward in this county.

Congresswoman Maria Ocampo delivered a speech full of praise for the Government of Chinchilla, although in an interview with this media had criticized the attention of the province. “It’s an honor to be part of your team (…), she is present and has a space in your heart to Guanacaste.”

This is the first day of Guanacaste tour, culminating in the official public ceremony to celebrate the Nicoya 188 years of the annexation of Guanacaste. The Governing Council will be tomorrow in Santa Cruz.