Well this is one court order that will not be followed and after it is not followed their will be no circumstances for them not abiding by the order.  Are you ready for a game of hot potato? Here is exactly what is going to happen in this stupid situation where the Costa Rica government is going to pass the blame between each different government entity involved in border road money misappropriation, which is now in the pockets of the government officials working on this “project”. 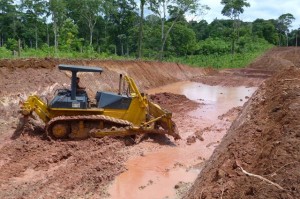 The Environmental Administrative Court gave 10 days to the National Roads Authority to submit a mitigation plan, for damages caused during construction of the trail border. But the fact is neither the CNE nor CONAVI nor SENAC nor MINAET will present this study.

he Court’s decision also includes the National Emergency Commission, the National System of Conservation Areas (SINAC) and the addresses of Water and Geology and Mines Minaet, so can expect “an interagency committee of experts to develop the immediately Mitigation Plan, repair and compensation for environmental damage caused by the construction of the Border Trail (Route 1856) “.

According to a press release, the Court found “unwarranted and excessive logging beyond the width of 10 meters should be the way.”

However, there were no findings that would affect sediment transport to the river San Juan.

Open your eyes Costa Rica the CR government is trying to block people from writing the truth because they are so full of shite.  If they are trying to follow the example of the USA they are doing a great job.  Just like nothing will happen in the USA from the shootings in Colorado because of the NRA money nothing will happen on this border road scandal.

AyA’s Water Rates up 25% on Average

Another DOG and PONY show. The outcome will be no one agency is responsible and their “”bonus”” will be intact. The extra logging around the road was a ruse to cut trees for the saw mill and a money maker for the ministers. Notice the ..CNE nor CONAVI nor SENAC nor MINAET will present this study. Same ol good boy situation and grab as much money as they can. Corruption at its finest.