Costa Rica News – More proof that Chinchilla is auctioning off the land of “Pura Vida” to the Chinese.  If you look around every corner the Chinese are getting their hands in almost every governmental pot they have come up. 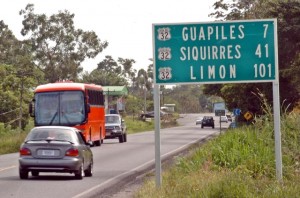 The Vice President Luis Liberman announced a credit of $ 400 million for the expansion to four lanes of Route 32, from the intersection of Rio Frio to Limon.

According to a press release, “China will finance about $400 million, a 20-year term, with a grace period of three to four years” which is not paid principal only interest equivalent to the period of construction plus one year and a rate of 3.5%, which is very reasonable “said the vice president.”

The technical details of the loan and the project “turnkey” should be ready by October 8th of this year.

It is unclear how soon the work and who would be in charge of them.

$400 Million dollars that will be granted to entities like MOPT and CONAVI which have most recently have brought us the greatest hits consisting of the Border Trail fiasco and the hole in the highway both of which proved cutting corners and money misappropriation.  But at least China will get to continue shark finning.